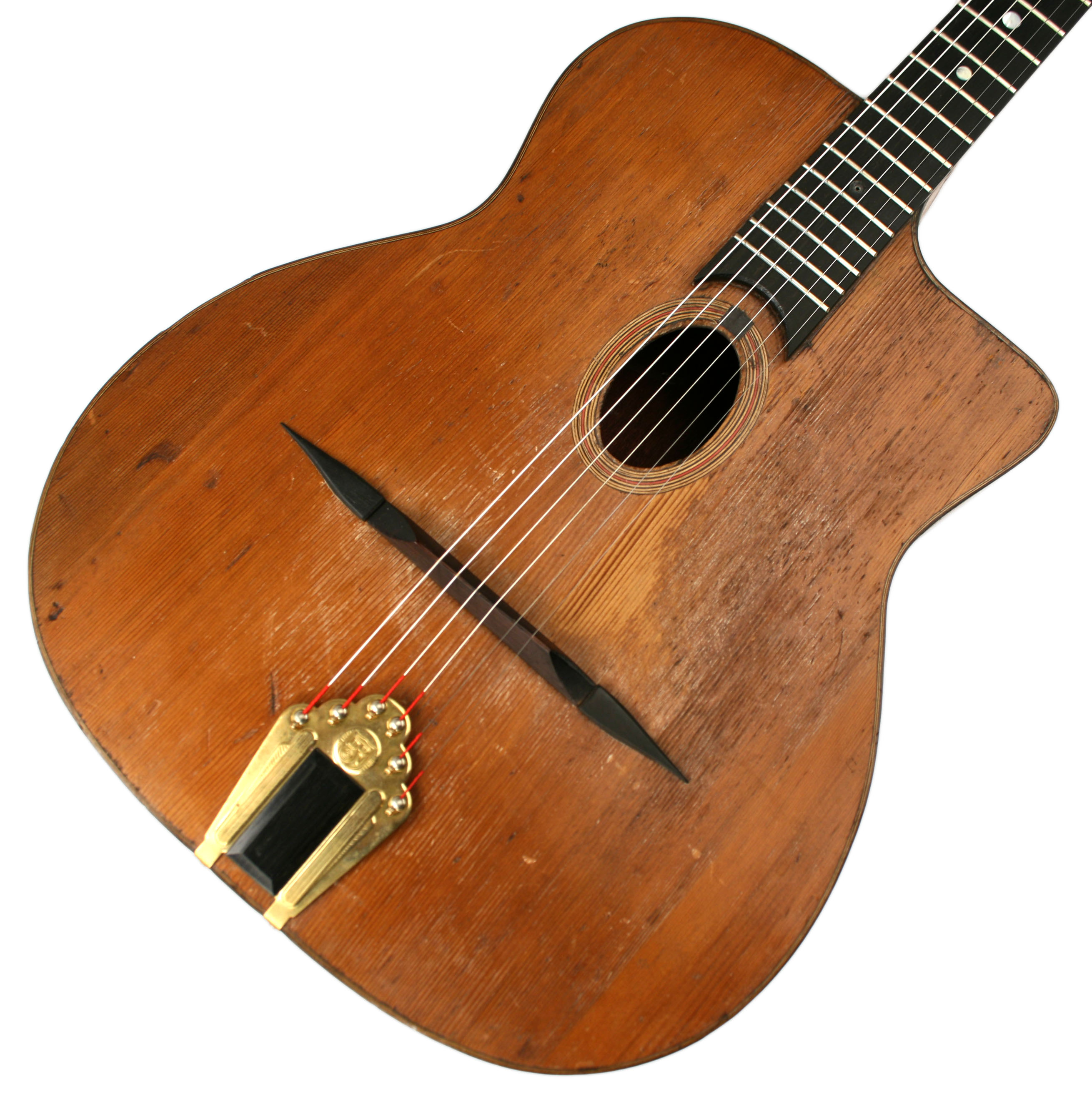 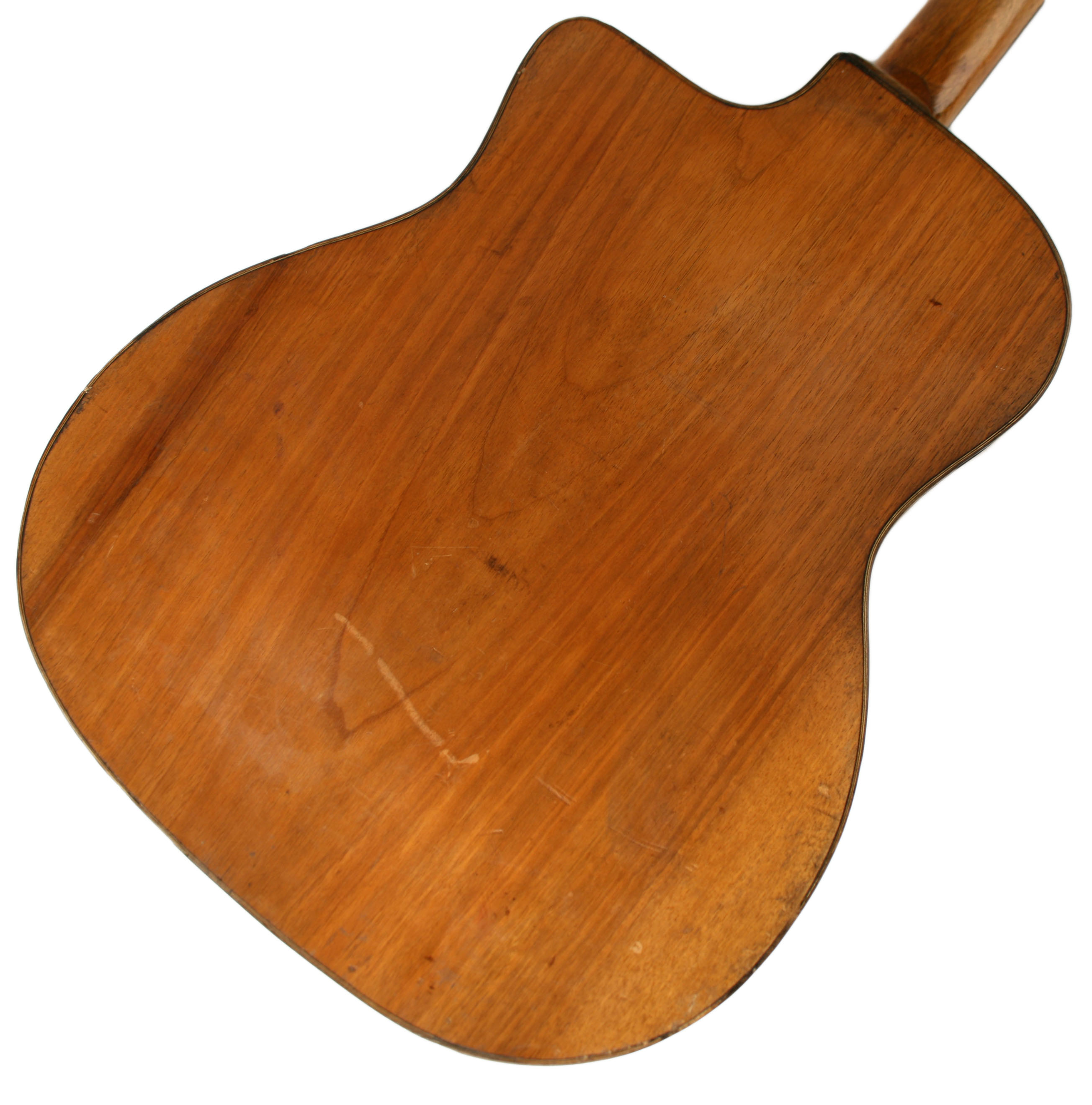 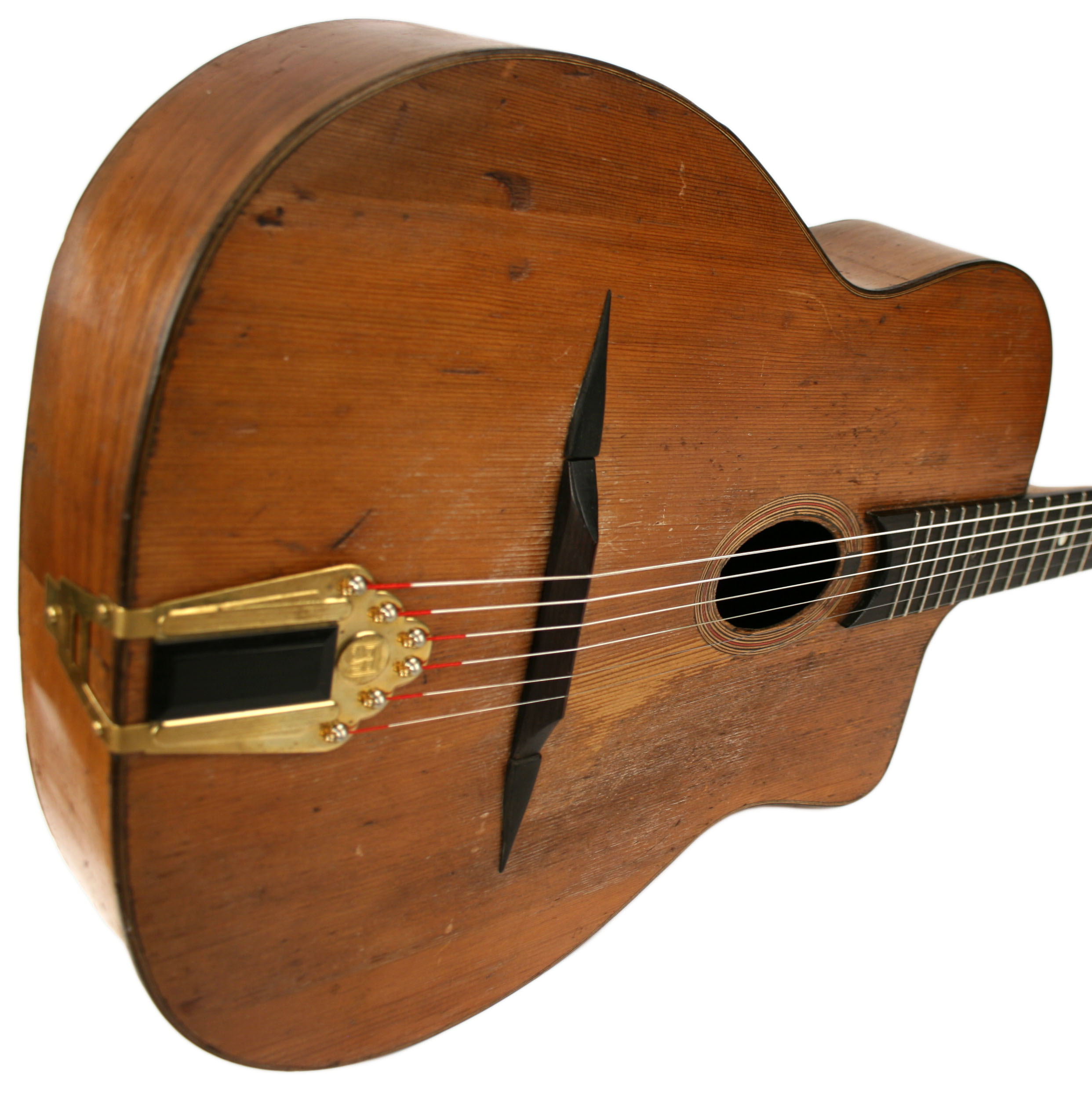 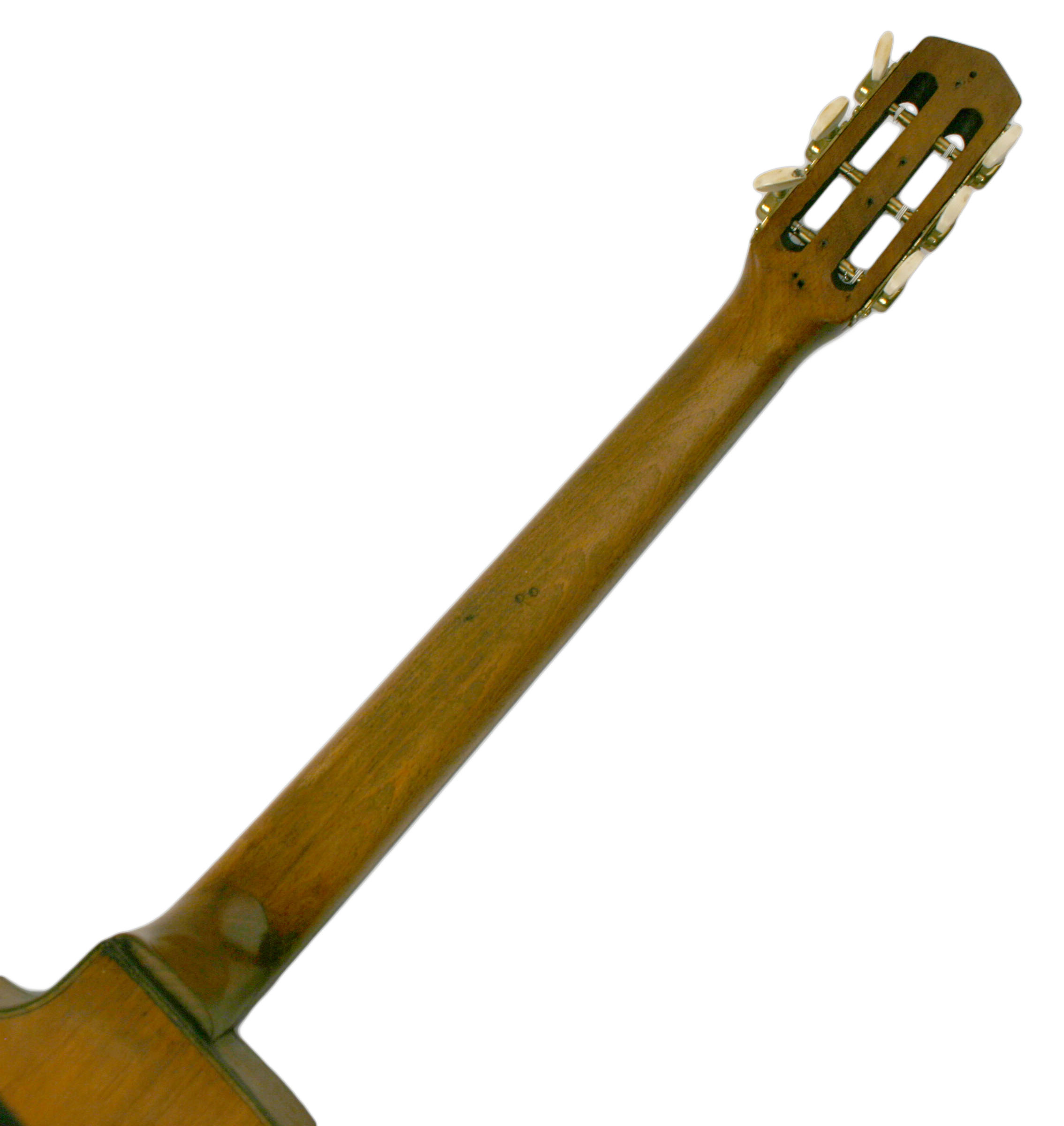 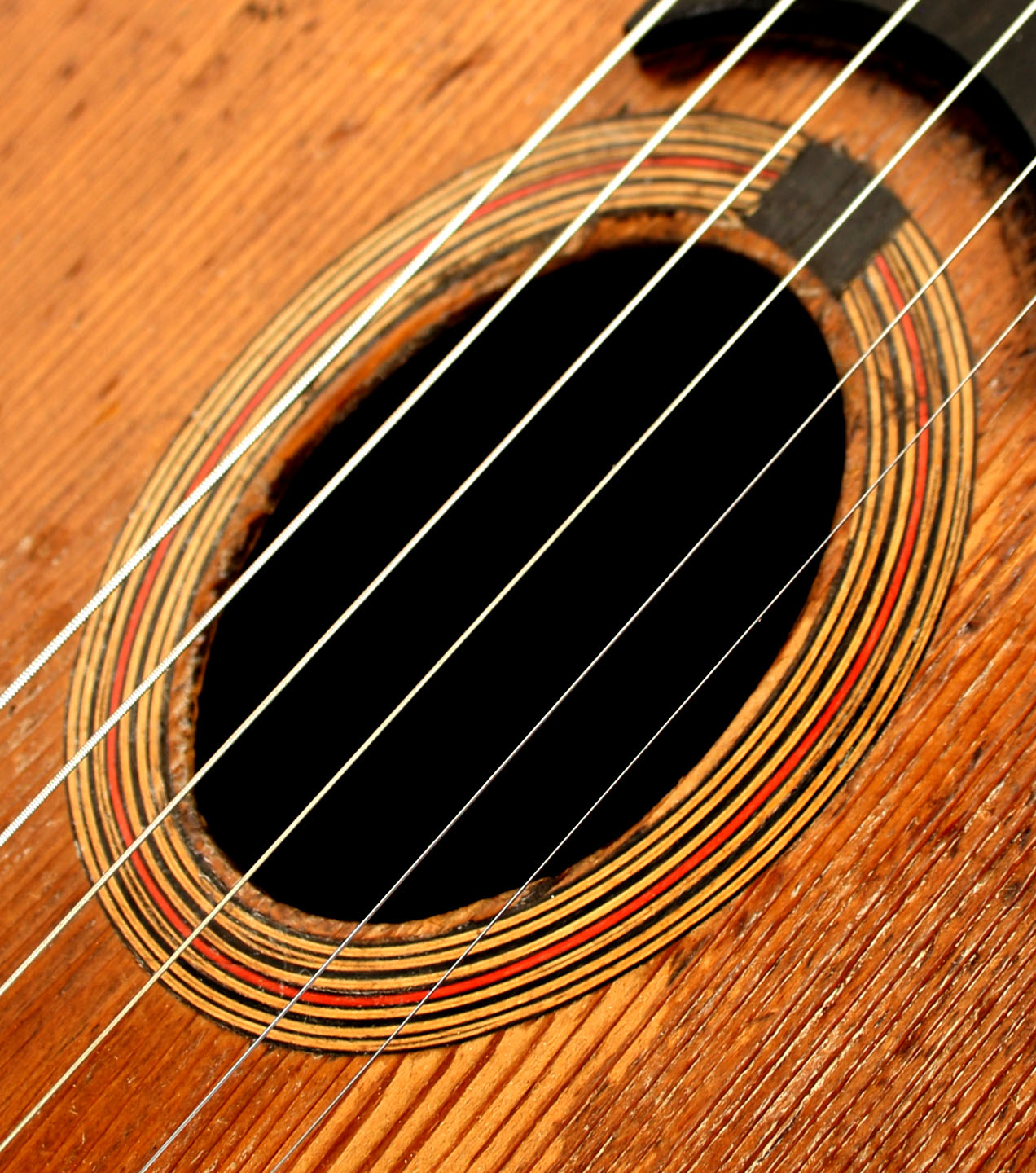 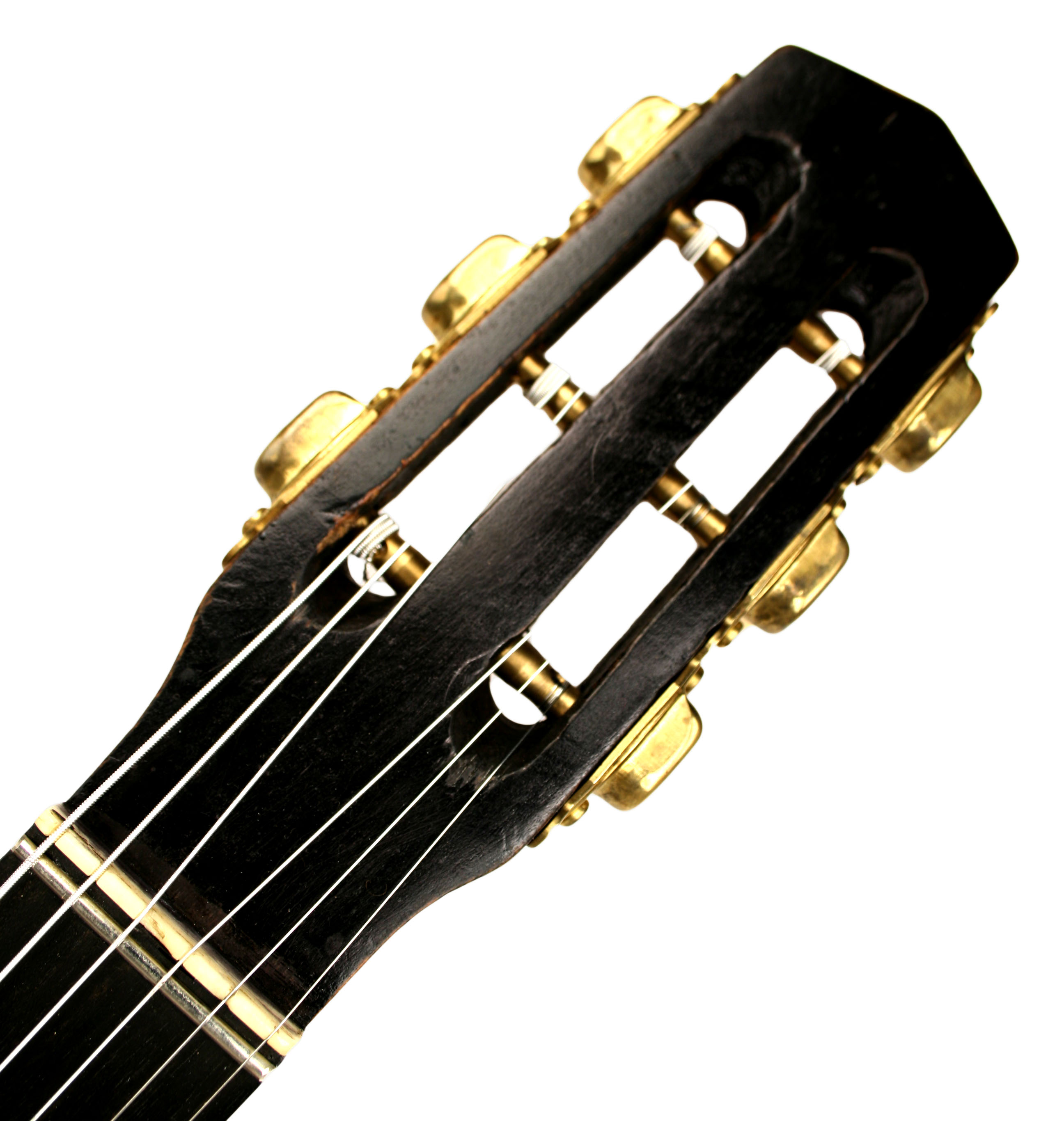 So what makes a Busato so great? Generally speaking, it simply out performs other guitars in almost every way. First off, they are positively the loudest guitars ever made! I've compared Busatos to numerous classic Gypsy guitars such as Jacques Favinos and Selmers as well as new guitars by J.P. Favino, Dupont, ALD, and Dell Arte. A good Favino is pretty loud...but the Busato is just a cannon. A vintage Selmer is actually quite timid by comparison. The Busato has three tonal elements which really make it cut in acoustic settings. 1) It is extremely dry. It has little or no natural wetness (reverb.) This makes the guitar much more focused and is therefore much easier to hear in a loud jam setting. 2) The tone is very pure with very simple overtones. The fundamental pitch of single notes are very strong while the overtones are extremely clean and even. Very flute like in character. A Selmer sounds more complex, but is also somewhat "messier" sounding which dampens projection. 3) It responds to the slightest touch. Just barely strike the strings and you get a lightening fast bolt of sound. I really like this because you don't have to play these guitars hard to be loud. Busatos yield an exceedingly wide frequency response. They have a crisp, bright high end which gives your leads some sparkle and adds ambiance and clarity to rhythm work. There's not much mids, except for a slight upper midrange nasalness. But nothing like a Favino in that regard.
This is Busato's smaller bodied option which is listed as modele #42 in his catalog. It features a narrower, 15 1/2" walnut body, a spruce top, and a walnut  neck. It is unfathomably light, weighing in at only 3.5lbs! As one would expect, it's ultra-lightweight design and Busato heritage conspire to produce a tone that is brimming with character. The tone is very dry and clear, with powerful fundamentals that yield rich, singing lead lines and crisp, crunchy chords. It's lightweight  design allows the body to resonate with peak efficiency, resulting in the sort of power and projection that only a fine vintage instrument can produce. No doubt, this one has mojo galore and is certainly like nothing you've heard before!
This instrument is in good condition, with signs that is was well played over it's long life. There is significant pickwear on the top and the body has quite a lot of small dings, chips, and scratches. The back of the headstock has several small nail holes in it and there are two spots in the neck were small holes look to have been filled. The tailpiece and tuners were replaced with new Dupont DR hardware. Otherwise, the guitar is in excellent shape, with no cracks or other structural issues. It is strung with Argentine 1510MF strings and plays easily with 3mm action.

Come experience the magic of Busato for yourself! It's not often we have such a fine example and such an affordable price