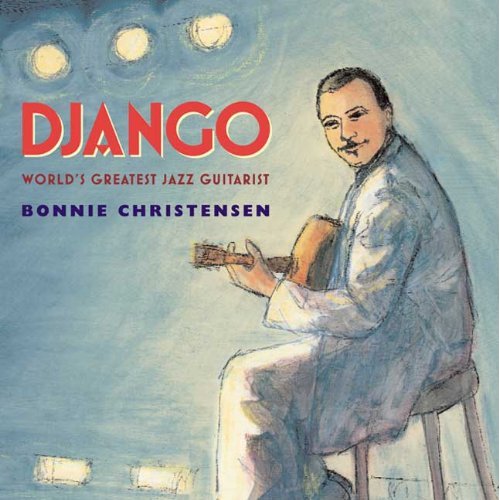 The story of Django Reinhardt is a natural for younger audiences—unlike so many other jazz musicians whose troubled lives and complex music have become the stuff of picture books. In spare, simple, rhythmic verses, Christensen tells the remarkable story of a young Gypsy boy, born in Belgium in 1910, who was surrounded by music as a child, learning violin from his father and later moving on to guitar. After his father abandoned him, young Django found his way to Paris, where he played on street corners, earning praise (“Gypsy Genius!”) and attracting attention. Soon he was headlining in clubs, but all seemed lost when he was burned in a fire, damaging his left hand so severely that playing the guitar seemed out of the question. But Django developed a way to work around his disability, and his self-made technique for playing chords proved perfect for the syncopated jazz style. Christensen supports the inspirational story with rich, vibrant paintings that capture the texture and tone of the landscapes in Django’s life: burnt oranges and various shades of brown bring the Gypsy campfires to vivid life, while bright blues shimmering under the sharp yellows of stage footlights depict the electricity of the guitarist in performance. The art steals the show here, but the text works fine, too, describing the essence of Django’s story without overwhelming middle-graders with too much detail. Grades 3-6