Savarez Single Argentine D strings 1014 (28 gauge, Loop End) - 10 per pack Arts & Entertainment Argentine_1014 2112 5.0 1
Jim Vence
5 5
To be clear upfront, this review discusses the packaging options available at DjangoBooks.Com for ordering Savarez’s Gypsy Jazz string gauges individually. I assure you the subject “Argentine Singles” does not refer to a dating service in Buenos Aires! ;0) If you are not familiar with Savarez Argentine strings, you may be new to Gypsy Jazz guitar. The official name is “New Concept” strings. Of course, having been around for over 60 years, and having been used by Django himself, they are ...
25.00 DjangoBooks.com https://www.djangobooks.com/Item/Argentine_1014
Location
Location
Home / Accessories / Strings / Single Strings / Argentine Single Strings / Argentine Single D Strings 1014 28 Gauge - Loop End(10 Pack) 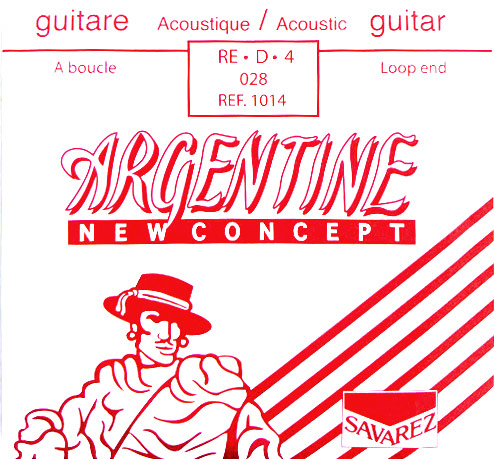 Pros: Strings custom to your liking!

To be clear upfront, this review discusses the packaging options available at DjangoBooks.Com for ordering Savarez’s Gypsy Jazz string gauges individually. I assure you the subject “Argentine Singles” does not refer to a dating service in Buenos Aires! ;0) If you are not familiar with Savarez Argentine strings, you may be new to Gypsy Jazz guitar. The official name is “New Concept” strings. Of course, having been around for over 60 years, and having been used by Django himself, they are not exactly a new concept. The strings, which are silver plated and copper wound, define the unique tonality of the Gypsy Jazz guitar, particularly when played on a Selmer - Maccaferri style archtop acoustic. The original Argentine strings came in what is referred to today as “extra light” (gauges 10-45, the numbers referring to thickness - roughly 10/1000 to 45/1000 of an inch) with purple (or violet) silk winding at the bottom and the end looped to hook onto the tailpiece of the Selmer guitar. The idea of extra light strings for jazz can sound odd at first to the classic American archtop player, but it is the suppleness of the lighter gauge, the set-up (often with relatively high action) of the Sel-Mac guitar, and the picking and bending techniques of the Gypsy Jazz guitarist that contribute to the signature tone of the Gypsy Jazz guitarist. As some players felt the original strings were too light, Savarez developed a set of strings in a slightly thicker (11-46) gauge; still relatively light strings. They are known as their “light” set and are distinguished from the “extra lights” by the use of red instead of purple/violet silk winding. Thus, Argentine strings are referred to often as “reds” and “violets” as opposed to “light” and “extra light”. In addition to string thickness, Savarez added the option to have the more common ball-end rather than the loop end of the string to accommodate different tailpieces. Added up, this means a set of six Argentines come in one of four options, based on whether you prefer the light or extra light gauge, and a loop or ball-end. As a guitar player develops his/her style and technique on a particular instrument, they may find a certain set of strings they generally like, but find some of the individual string gauges in the set not to their liking. A heavy metal guitarist my like the bendability of the ultra-light set, but find the high E string sound too weak. An acoustic blues player may love the thicker tone of a packaged set medium gauge strings on their flat-top, but wished the G string were lighter, perhaps with no winding wrap, than the “G” that comes with the set. After five years of focus on Gypsy Jazz (and having played many styles over the years), I’ve discovered I prefer the feel and tone of light (“red”) strings overall, but want the easier bendability of the extra-lights (“purples”) for my G and D string. Fortunately, Michael and DjangoBooks.com give you the option of purchasing Argentine strings individually (in packs of 10), so you can customize the set of strings to your liking. The advantages of this are obvious – you have the ability to play with the set of six strings gauged to your preference, rather than having to compromise on a pre-packaged set. The down-side of mix-and-match gauges are (1) larger quantity purchase upfront (singles are sold in a pack of 10, requiring a purchase of 60 strings to cover the six string guitar --- vs. buying a single pack of 6 strings), and (2) more care is needed when ordering to make sure you have selected the right string (E-A-D-G-B-E), gauge (extra-light vs. light), and string end (ball vs. loop end). For me, those down-sides are negligible, and I am glad to be able to customize a set of Argentines to my liking. So now you can easily identify me when I play guitar. I’ll be the guy on the Dell Arte archtop with two inside strings in purple wrap, and the outside four strings in red wrap!