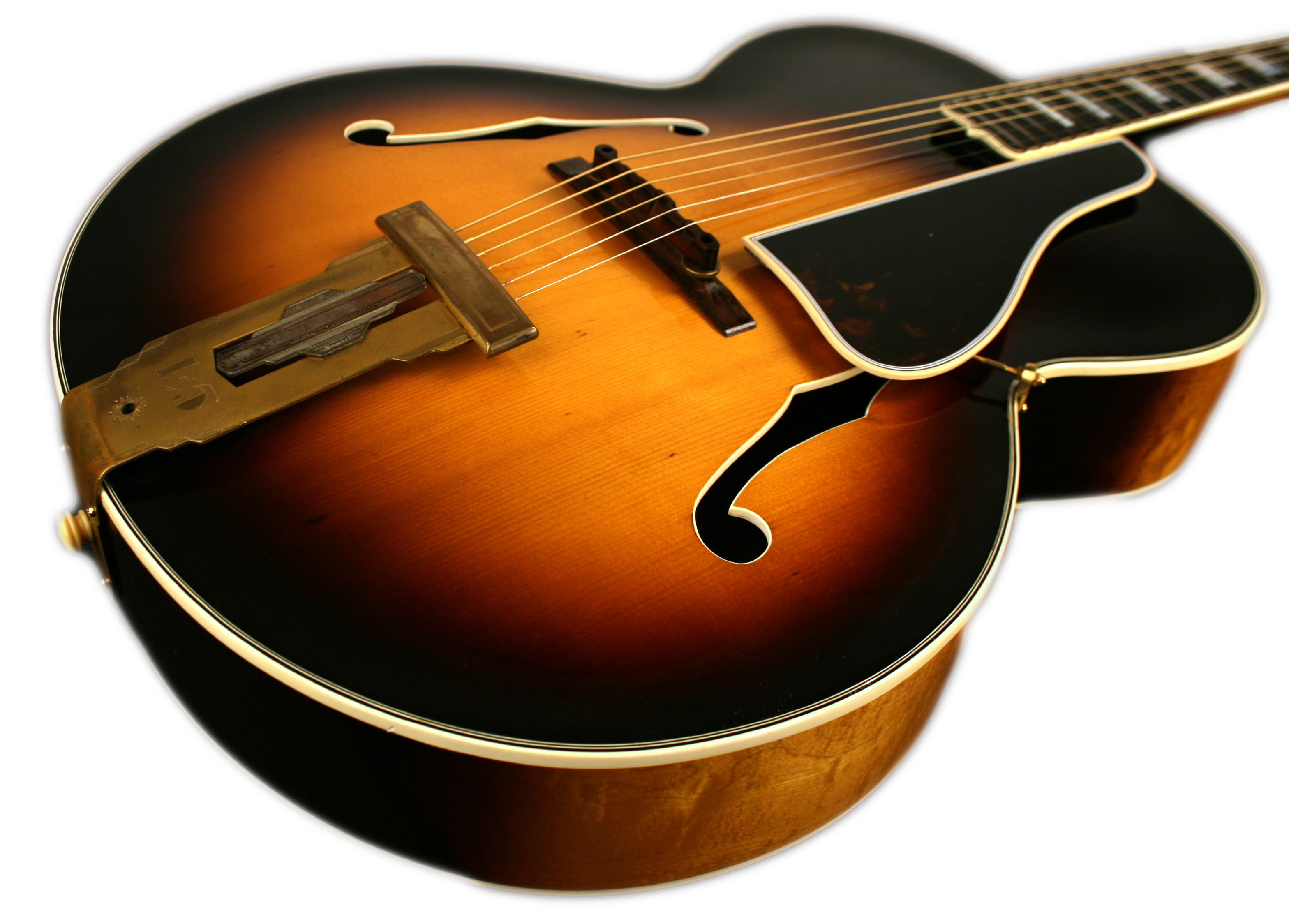 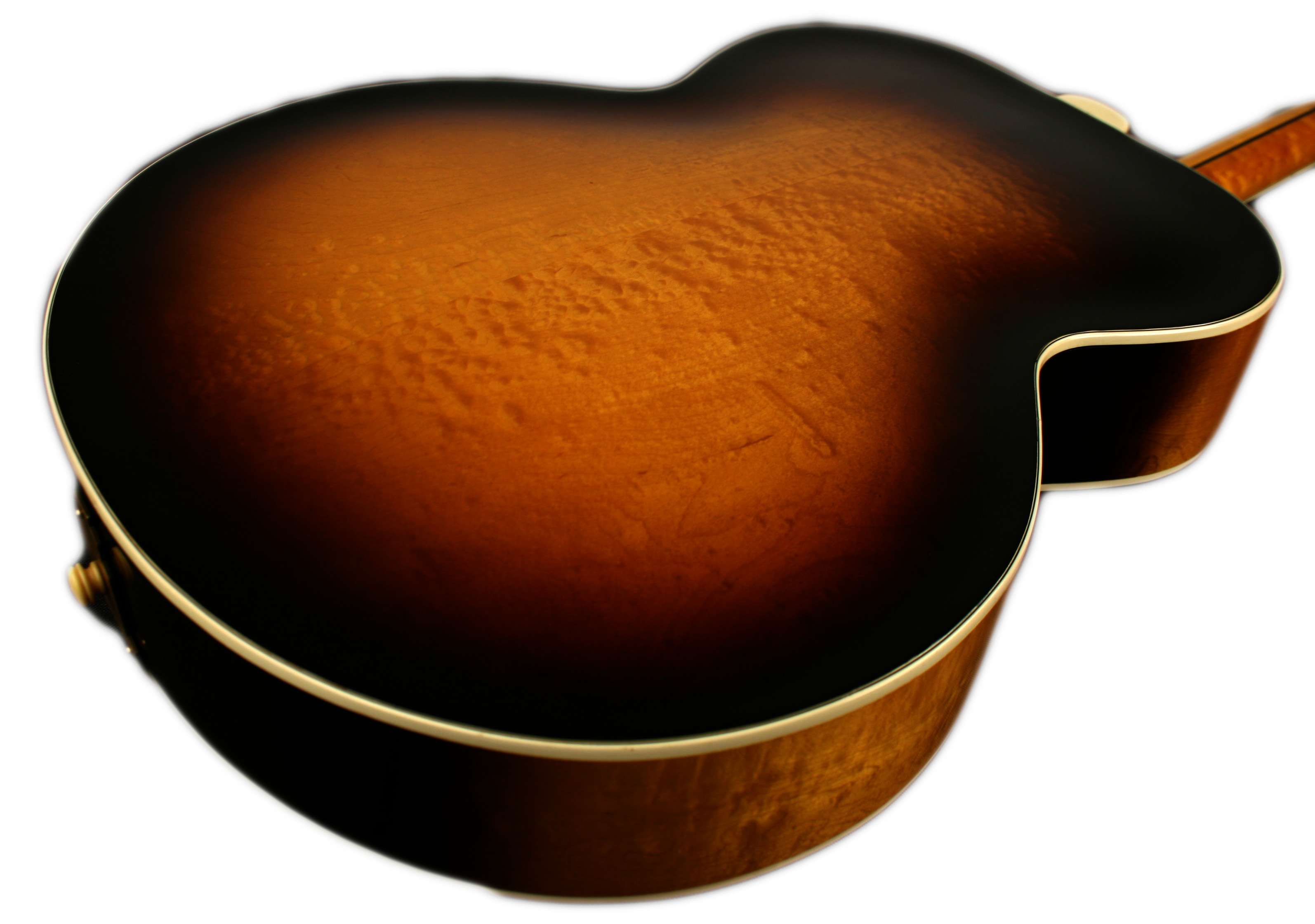 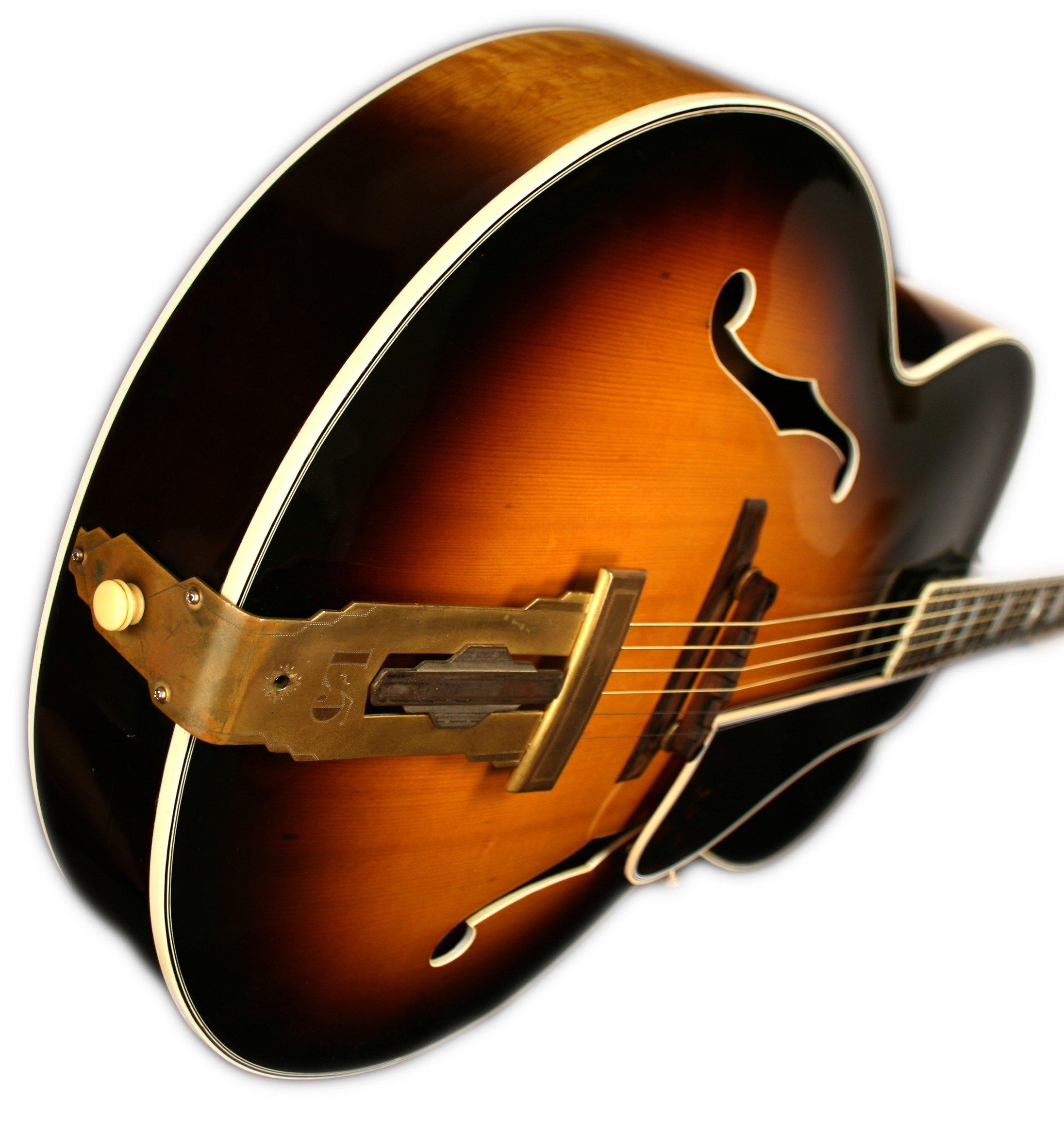 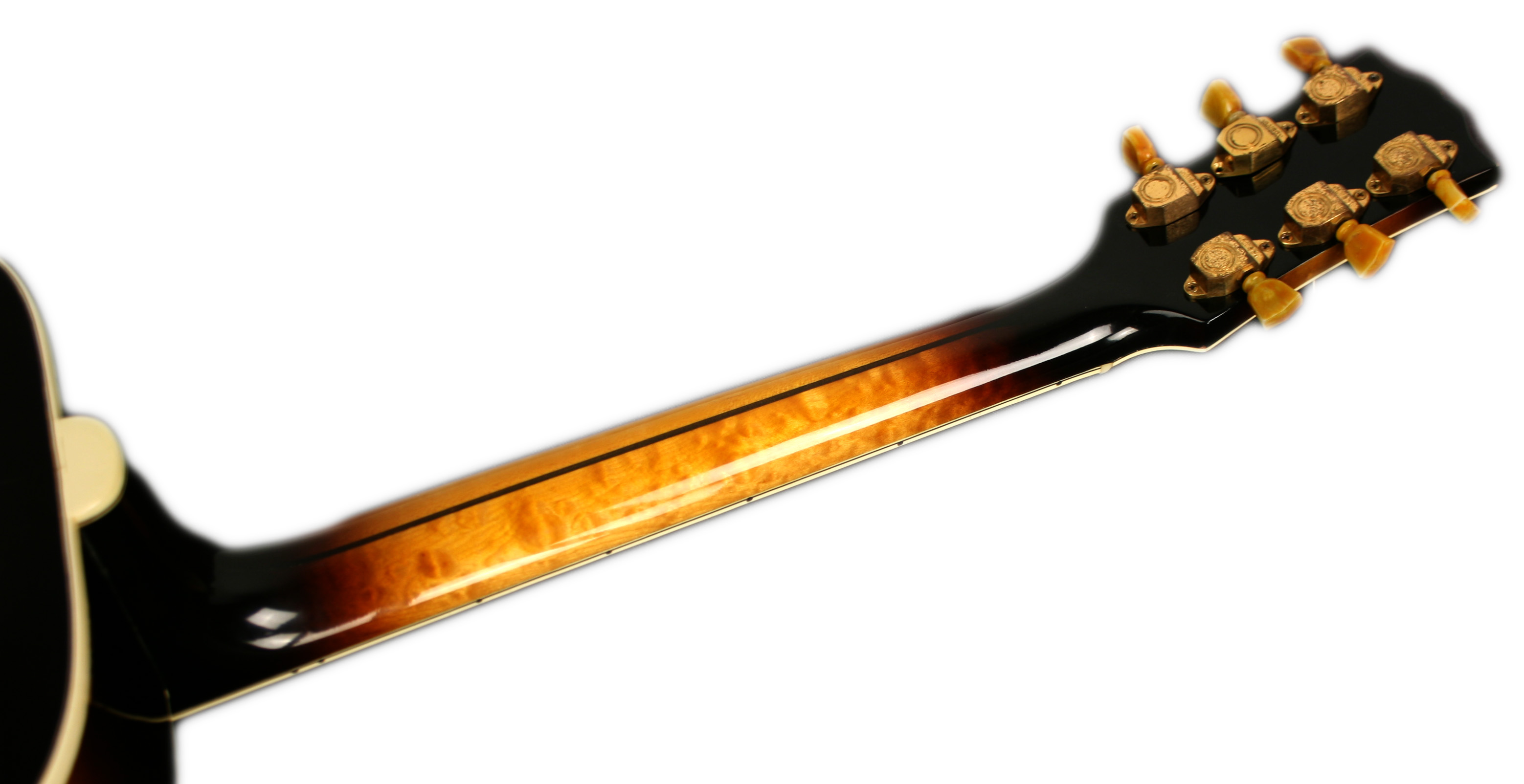 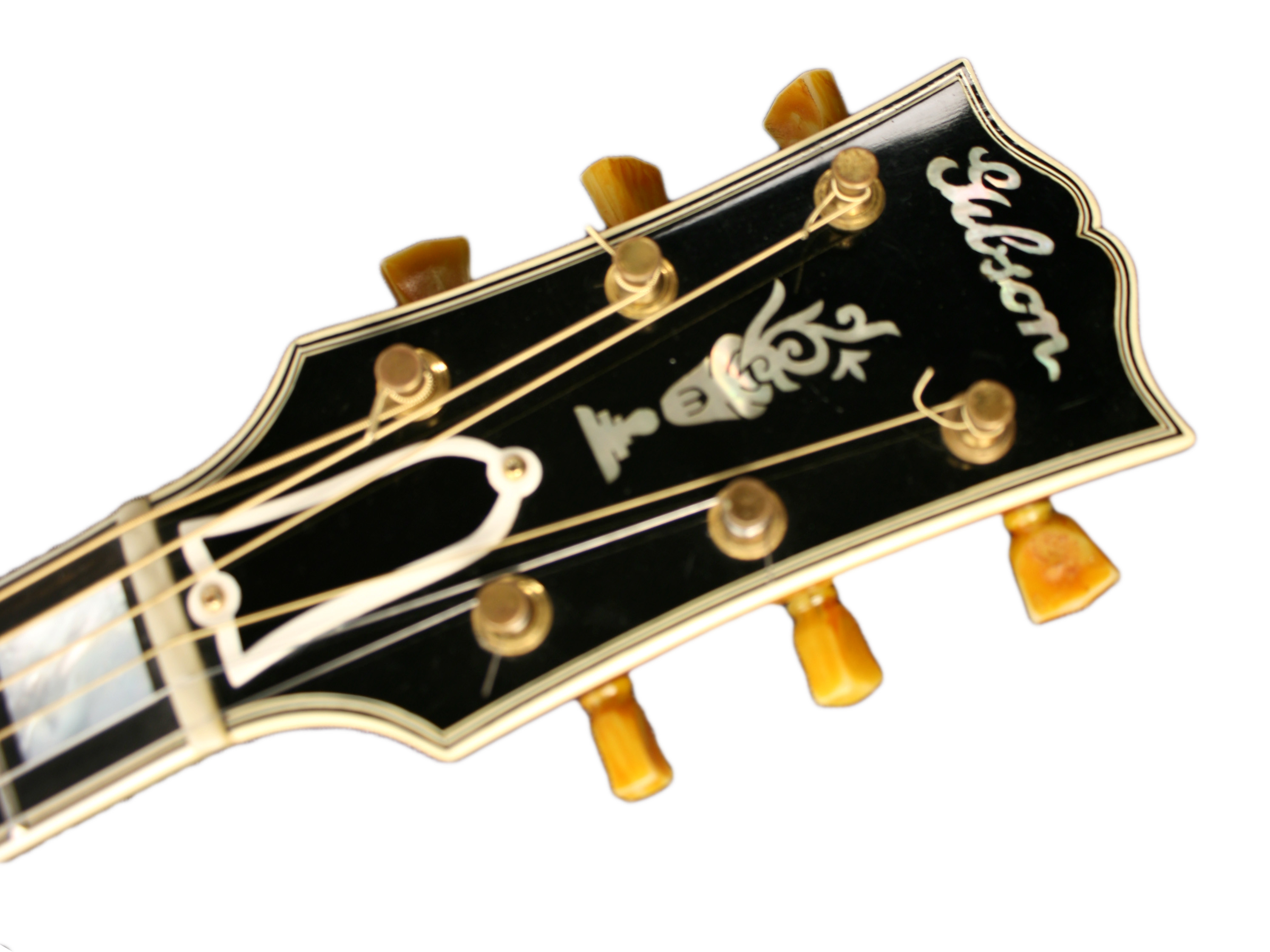 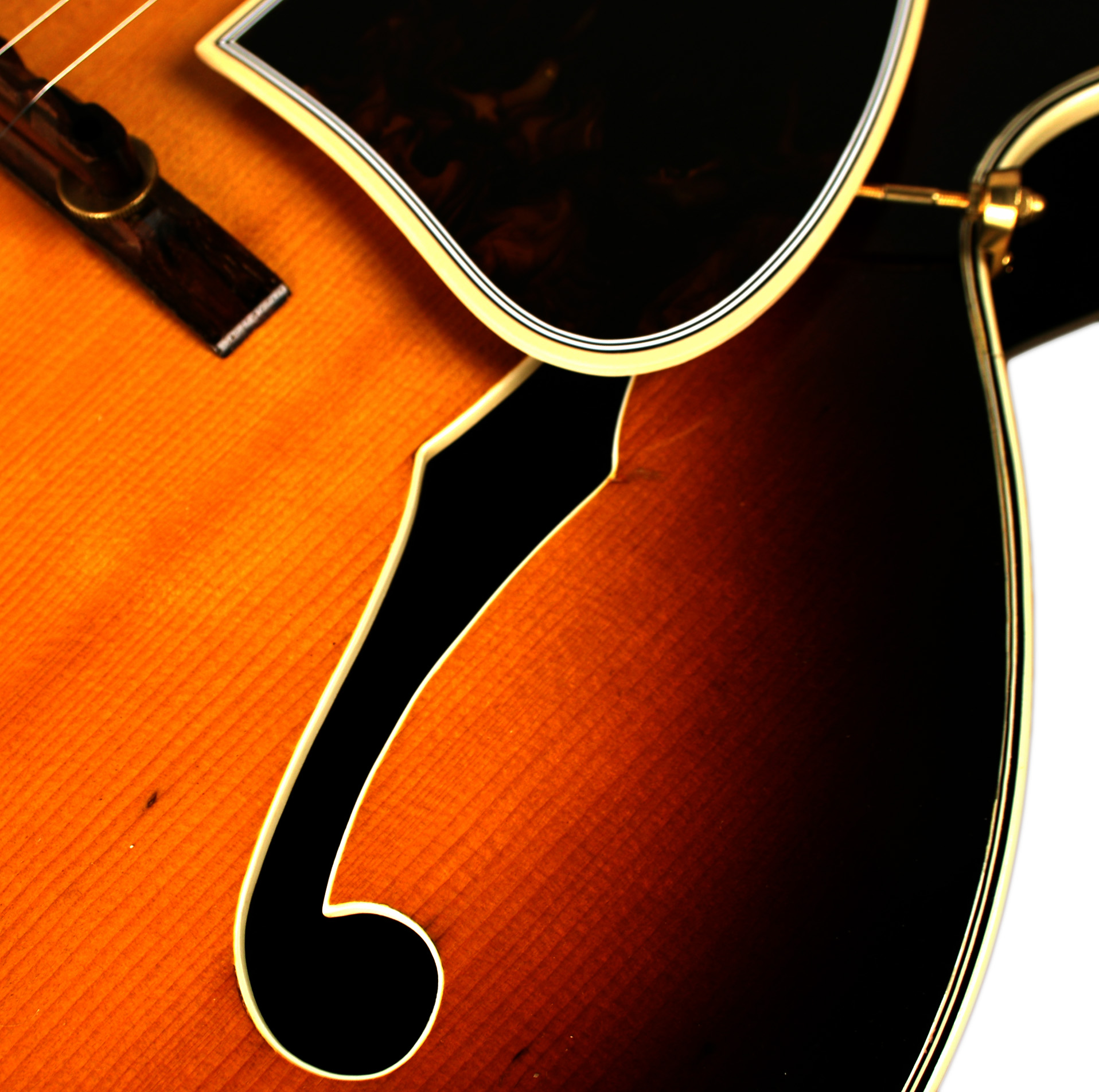 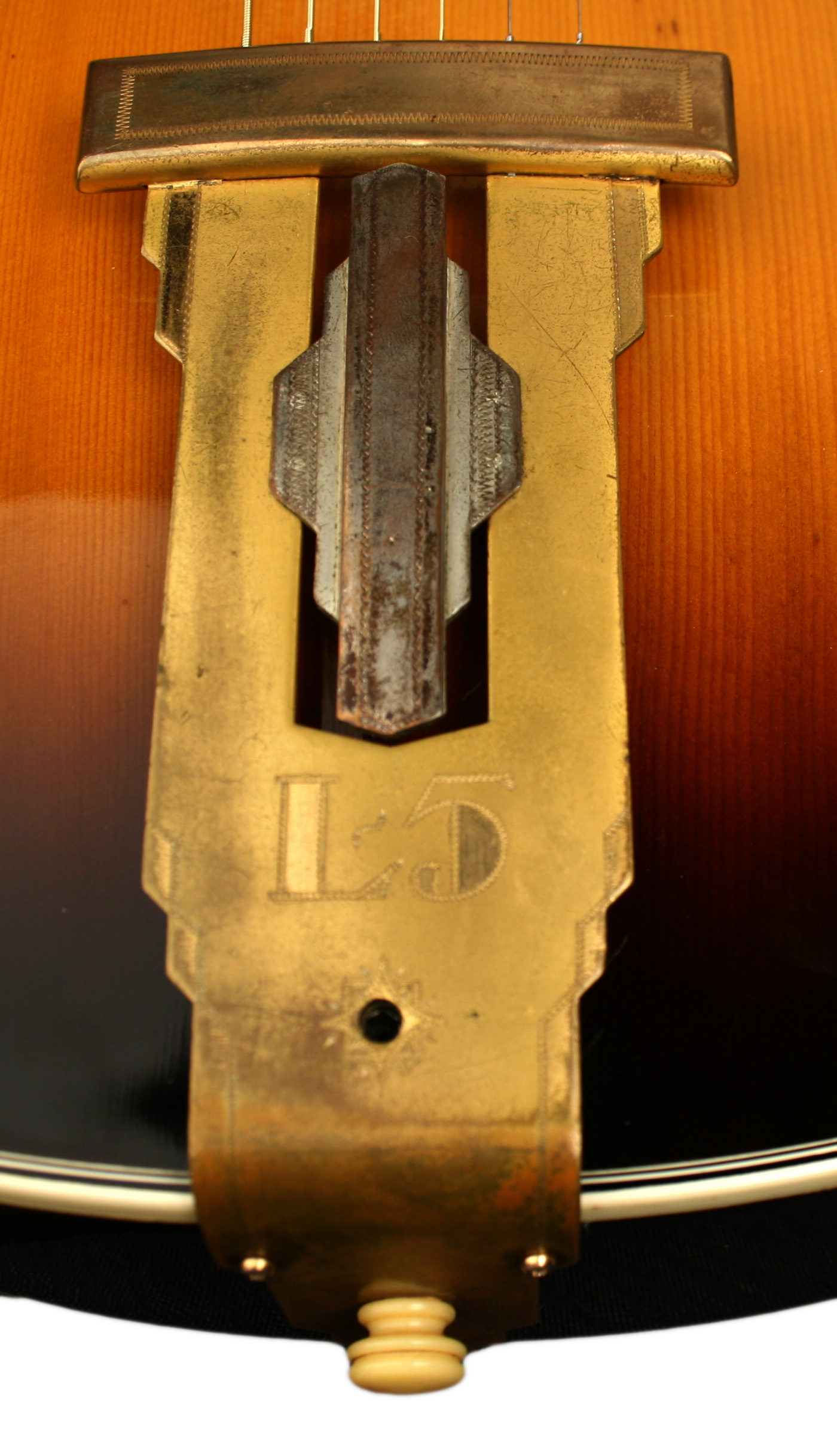 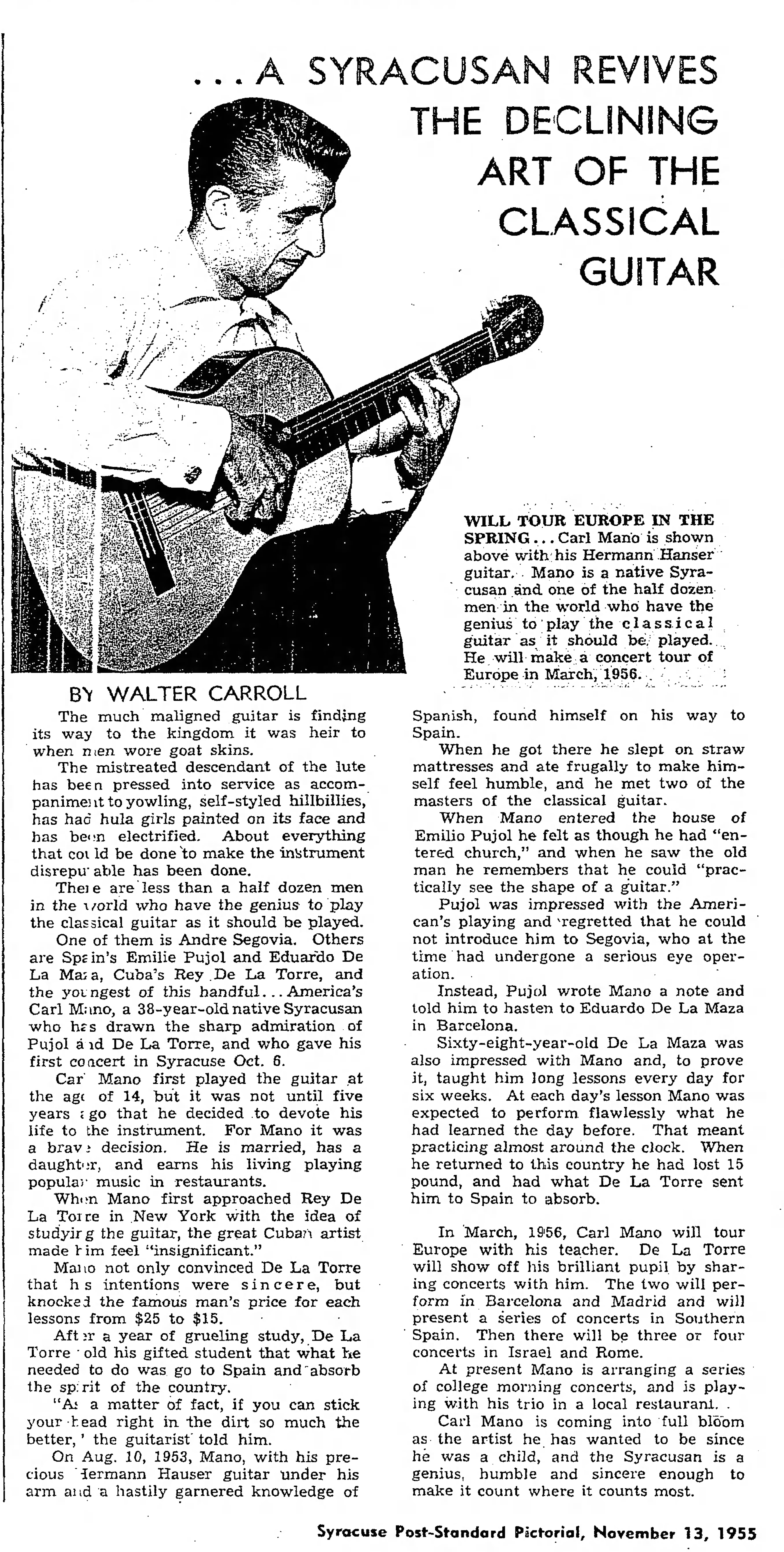 Follow Us Follow Us Follow Us Follow Us
Submit a Review
1945 Gibson L-5
This stunning example of Gibson's flagship 17" archtop features rare bubble maple back and sides, maple neck, and a spruce top. It has the original ebony fingerboard, adjustable rosewood bridge, and a period correct replacement pickguard. The original  varitone tailpiece is the fancier, pre-war style which has more ornate engraving than the simpler post-war versions. The Kluson sealfast tuners are original, but the buttons have been replaced with period correct ones (the original, degraded buttons are in the case.)
This flagship model was the premiere choice for guitarists during jazz' Golden Age. This particular instrument was purchased new in 1945 by the illustrious Syracuse based guitarist Carlo Mano. Carlo concertized extensively in the NY area, using this instrument with his Carlo Mano Trio. Interestingly, Carlo was also an accomplished classical guitarist who studied with Rey De La Torre, Eduardo De La Maza, and Andres Segovia. An active teacher, many of Carlo's students are still concertizing. After Carlo's passing in 1986, this instrument was lovingly cared for by Carlo's grandson.
The Factory Order Number for this guitar is 2576. This is a rather early number from a series that ranged from 1-7900 used between 1940-1945. Although the serial number indicates the guitar was shipped in 1945, the low FON number suggests construction began as early as 1941, which would explain the pre-war characteristics of this instrument.

The clear, warm tone of this instrument served Carlo well throughout his long career. This is one of the driest sounding archtops I've come across, producing almost no overtone ringing or "wetness" of any kind. Each note has a very strong fundamental, with lots of woodiness and definition. Consequently, it is a superlative rhythm guitar as the chords are crisp and snappy, with each voice clearly audible. Single note playing is a joy, as the guitar responds evenly across the entire fingerboard with a pleasant roundness of tone.
This instrument is in excellent condition with no cracks or other structural damage. It did have a DeArmond pickup mounted to the fingerboard at one point, so the two small screw holes are still visible from the side. The guitar was sent back to the Gibson factory in Kalamazoo sometime in the 1970s and refinished with a period correct color pallet. It looks to also have been refretted by Gibson, using extra wide frets that were common at that time.
Here's a chance to own a titan of the jazz age, the legendary L-5 in immaculate condition. This one could be yours, call now!
This is the CASH price...add 3% (4% for International orders) if you'd like to pay with a credit card.
Pricing Info:
SOLD
Guitar Specs
Home  |  Forum  |  Blog  |  Contact  |  206-528-9873
Follow Us
Follow Us
Follow Us
Follow Us
Follow Us
Follow Us
Follow Us
Follow Us
Sound Cloud
The Premier Gypsy Jazz Marketplace