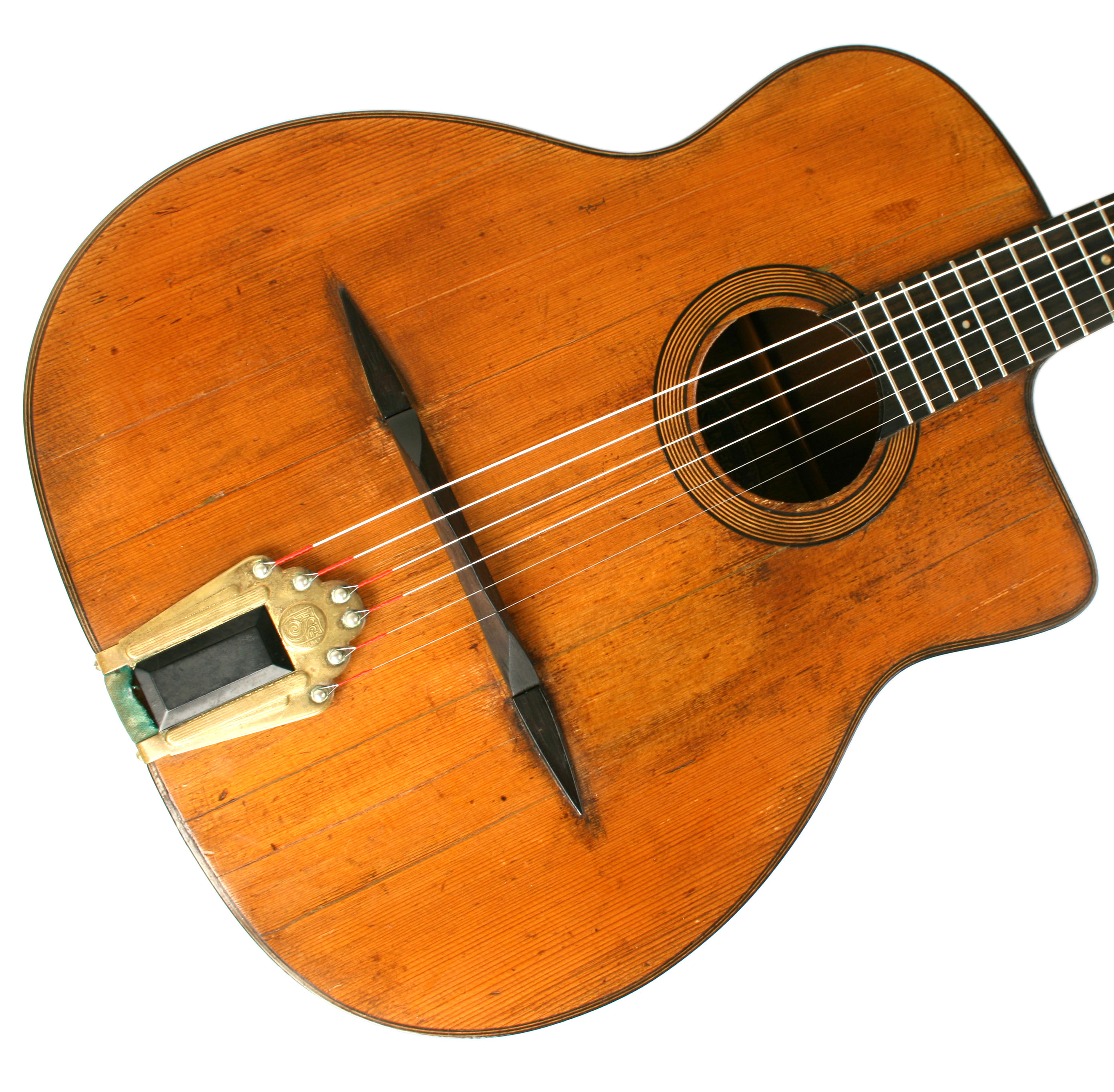 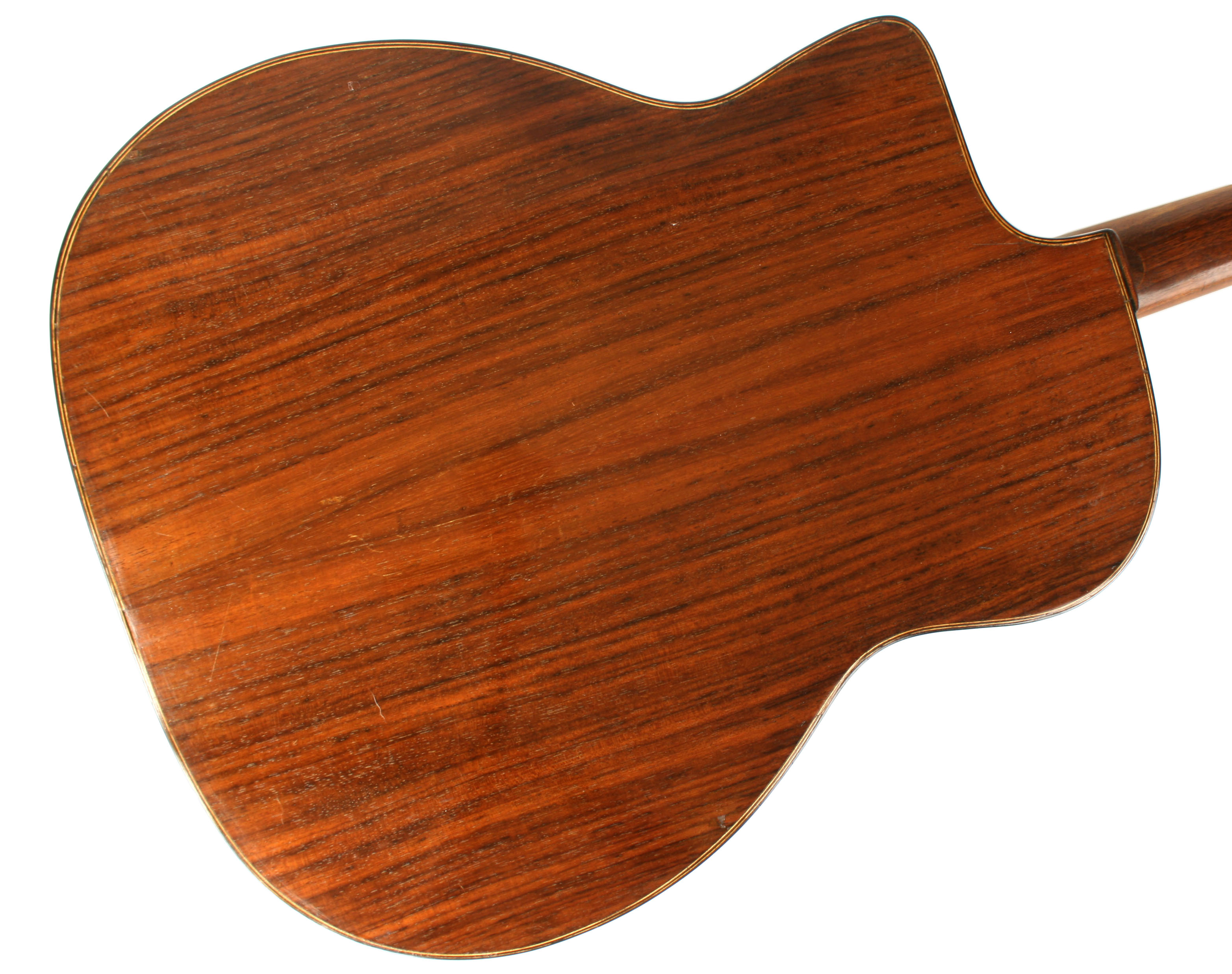 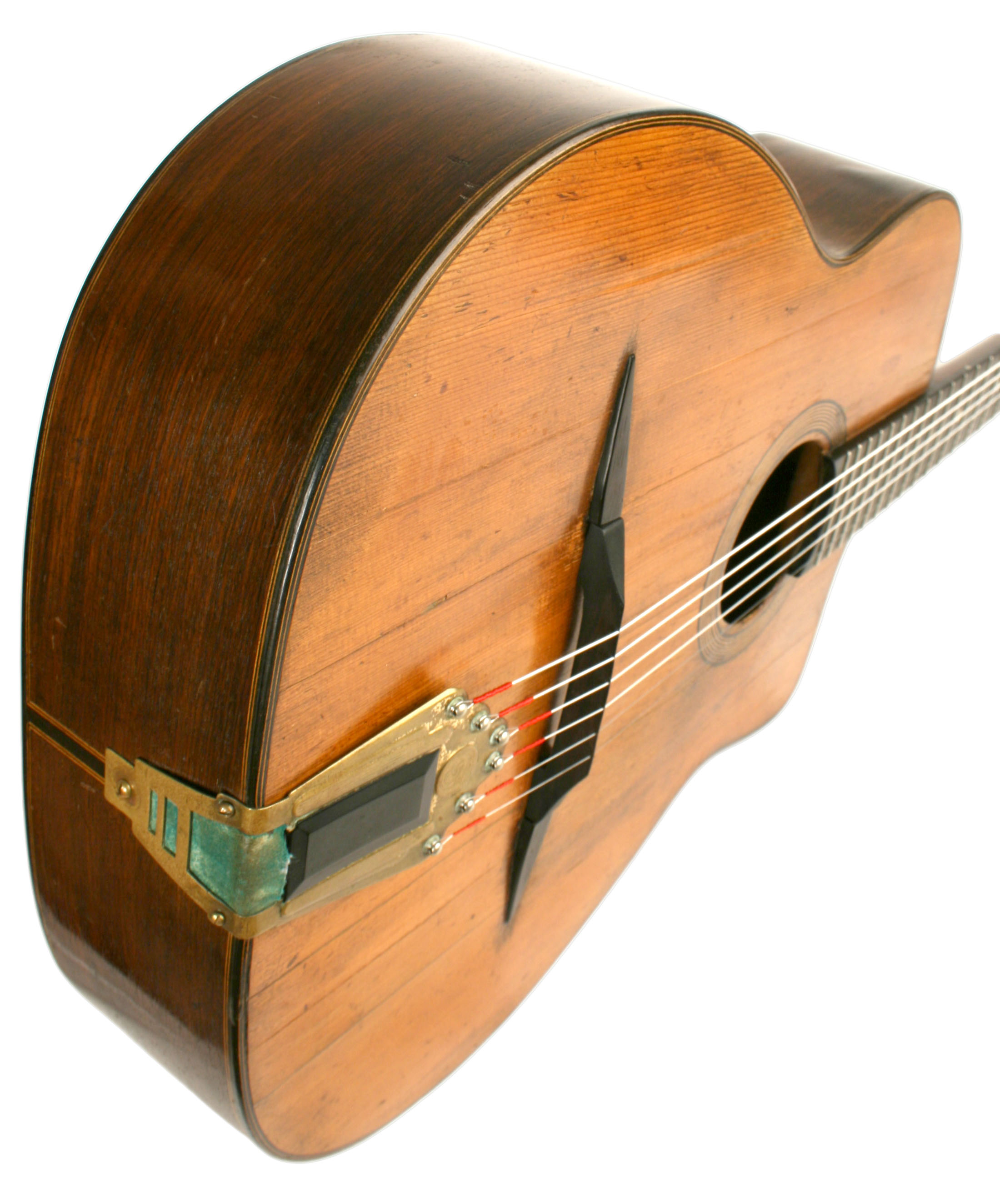 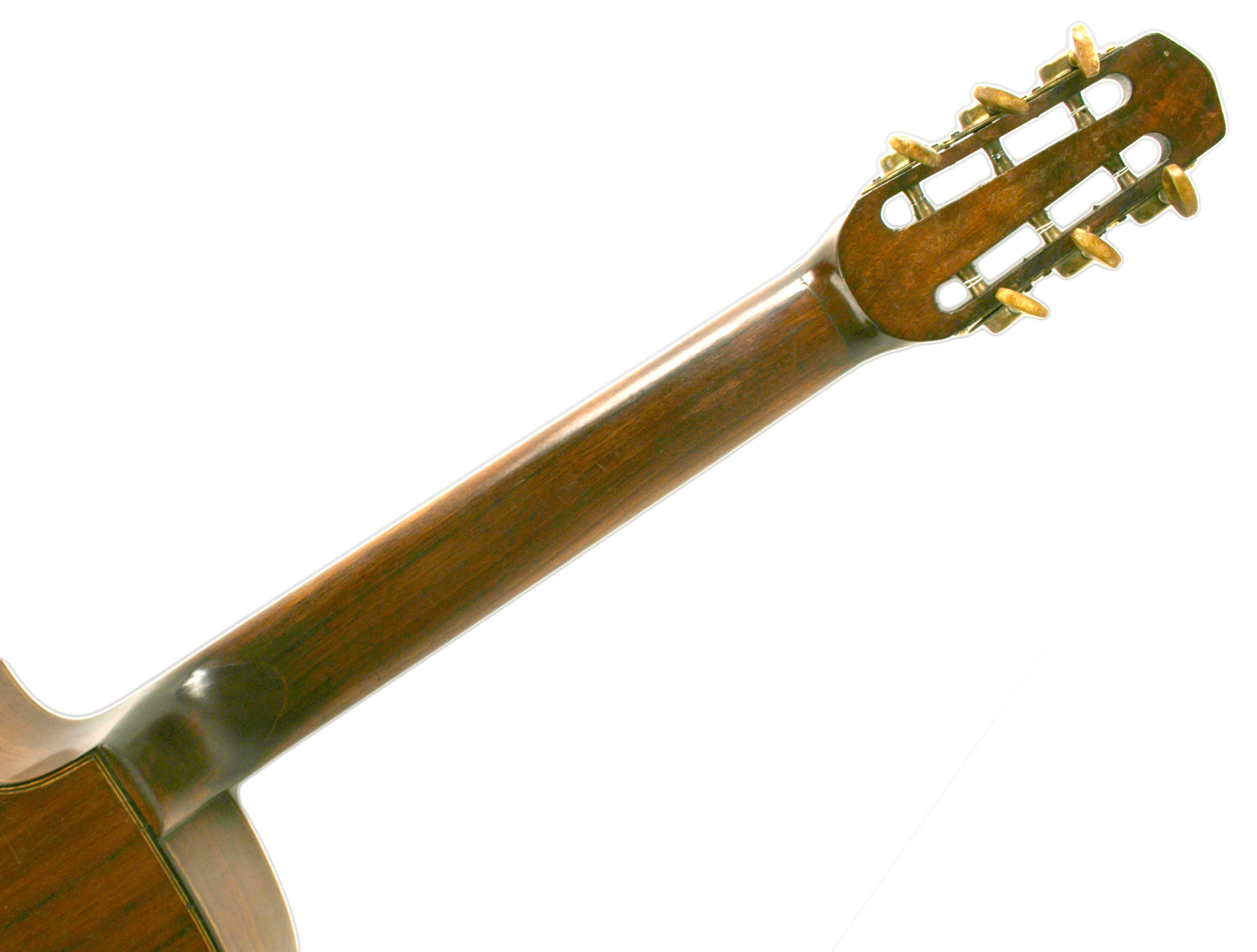 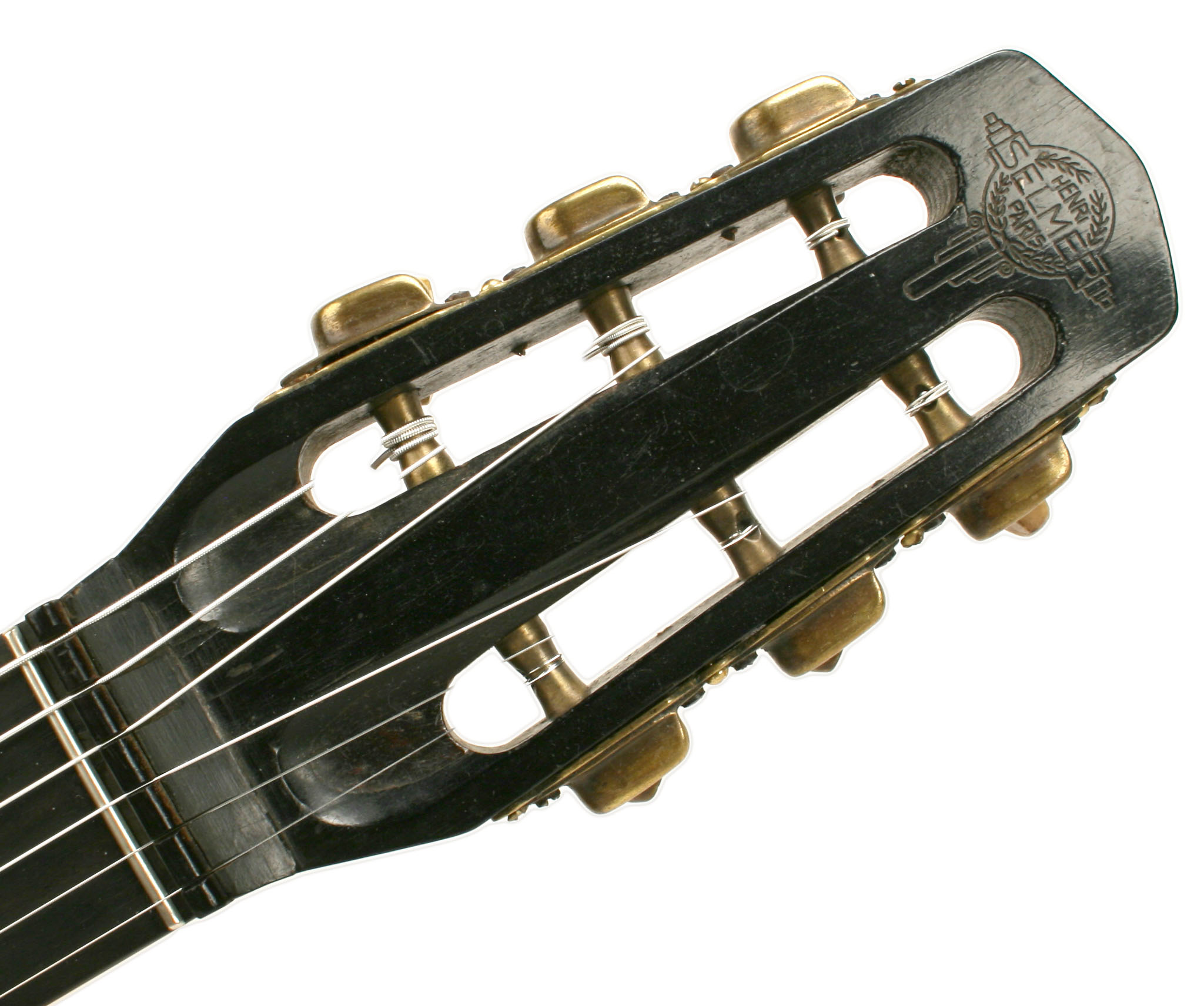 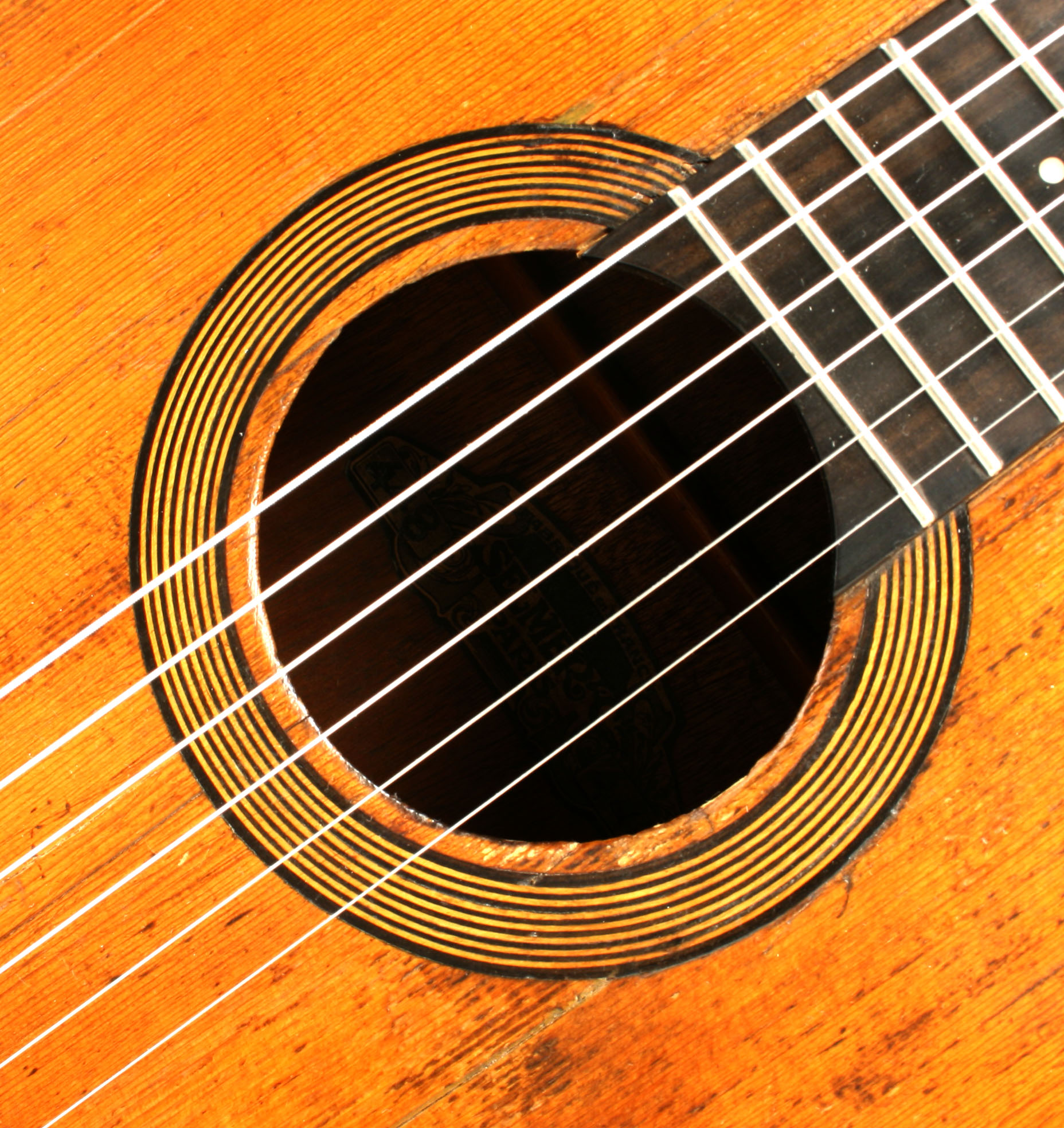 DjangoBooks.com · 1938 Selmer Roundhole #448
Follow Us Follow Us Follow Us Follow Us
Submit a Review
1938 Selmer Roundhole #448
Rarer than hen's teeth, this pre-war transitional model features a traditional round soundhole, a 12 fret neck, and a short 640mm scale length. Only about a half dozen of these roundhole models are known to exist (this is the only one I've ever seen in person.) Surviving examples of pre-war Selmers of any kind are tough to find, but this super rare roundhole model is arguably one of the most difficult to obtain!
After the departure of Mario Maccaferri in 1933, Selmer began to modify his original design to better meet the needs of professional guitarists. The principal modifications were the removal of the internal soundbox and the abandonment of the D shaped soundhole. Selmer's guitars from this period mostly feature smaller, oval soundholes, but a select few have a round soundhole like the example listed here. Other than the soundhole, this guitar is identical in specs to the earlier Macafferri models, so it has a 640mm scale, 12 fret  neck, and four brace top. The Selmer guitar later evolved into a longer, 670mm scale instrument with a 14 fret neck and a five brace top.
Most luthiers will agree that a 12 fret neck produces a more balanced, fuller, and warmer tone than a 14 fret neck instrument. That is certainly true with this guitar which has a near perfect tonal balance, producing beautifully rounded highs, thick mids, and a full, clear bass. It has enough cut for lead playing and chords have a bigger than life, pianistic like quality to them. Just one strum, and you'll realize they just don't make them like this anymore!
The condition of this instrument is very good, with all the original hardware intact and no major repairs. There are numerous top cracks, all of which have been repaired with glue or cleats and are stable. The frets were replaced and have some mild wear.
Here's a chance to own one of the rarest and most collectable Selmers ever made. Get it while it lasts!