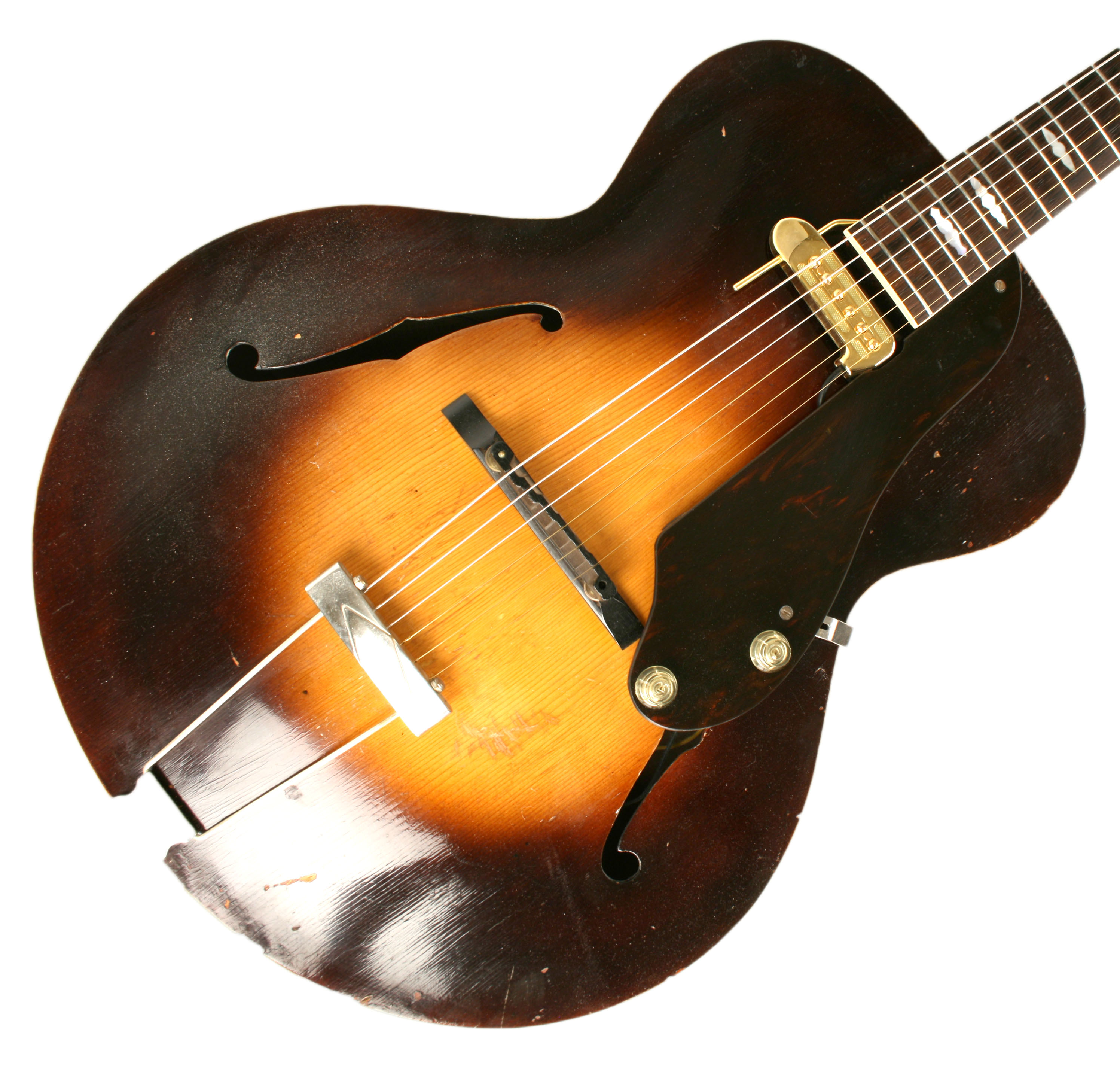 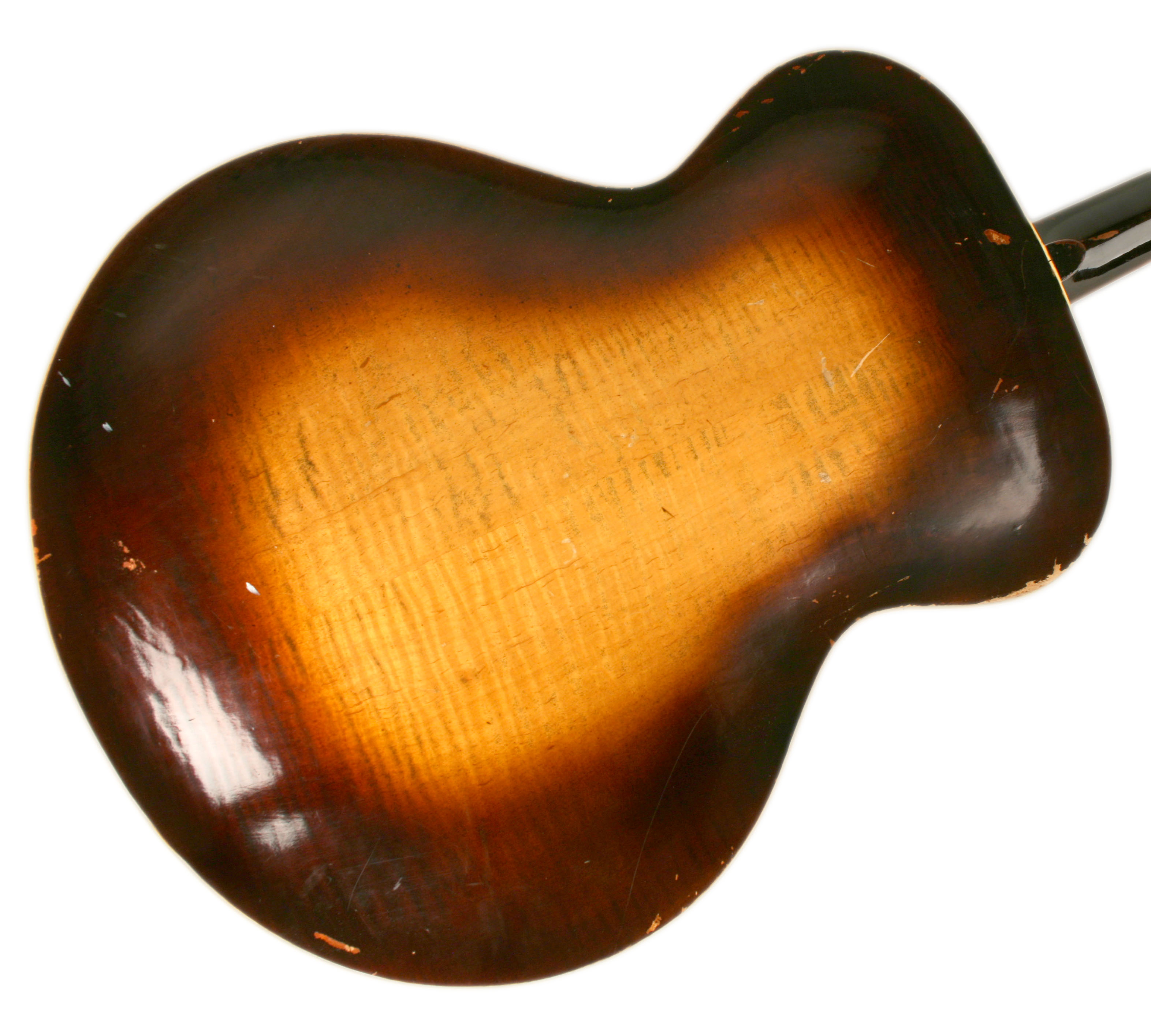 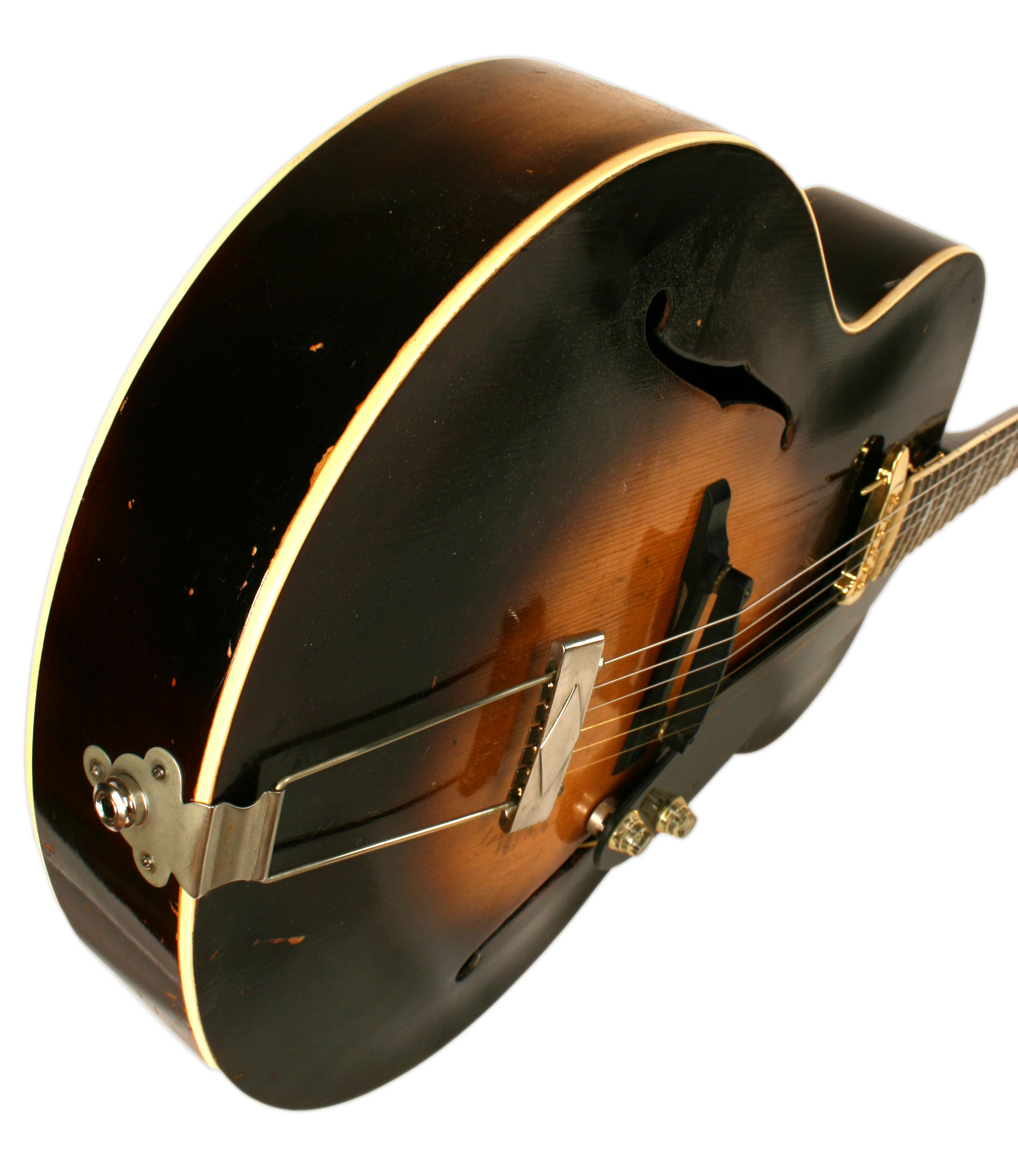 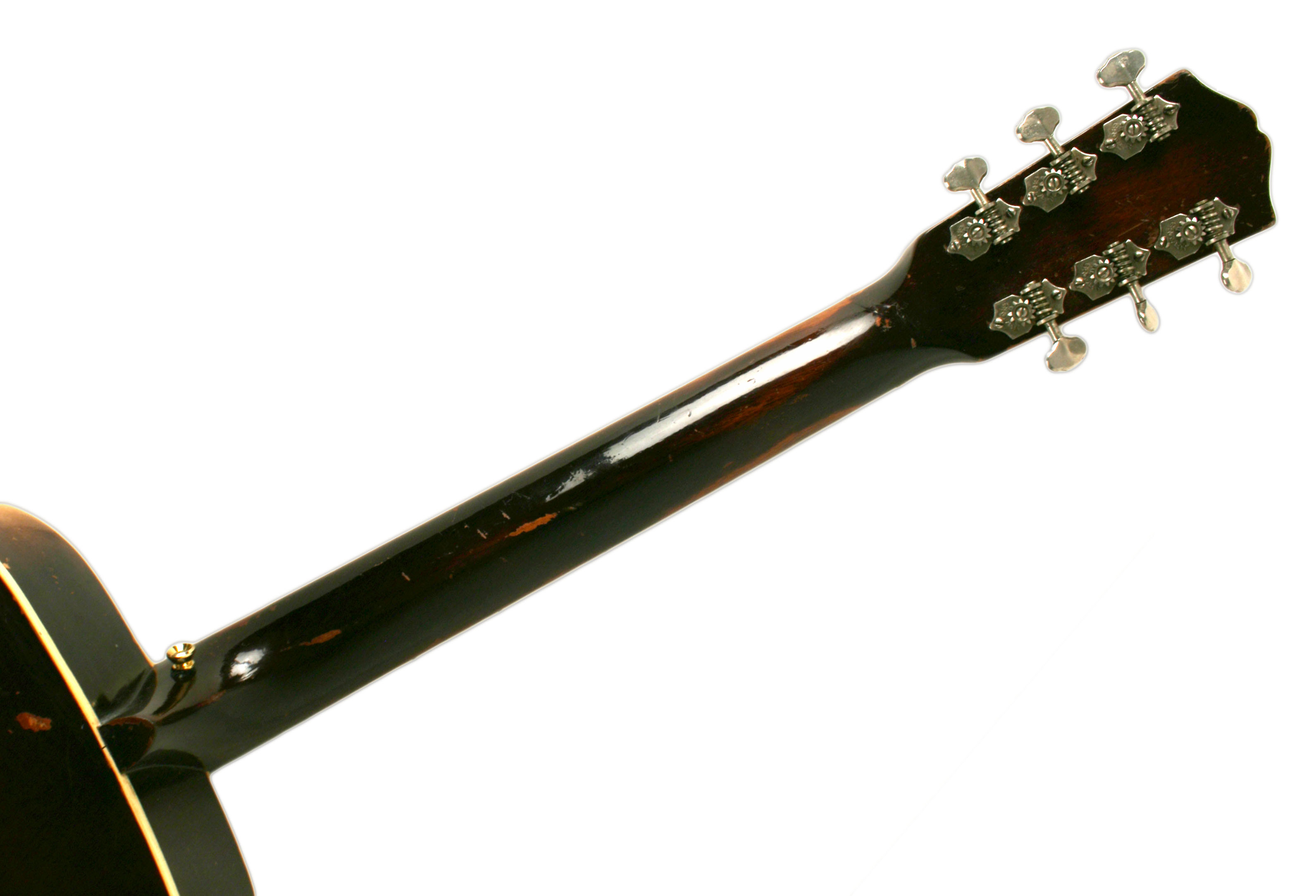 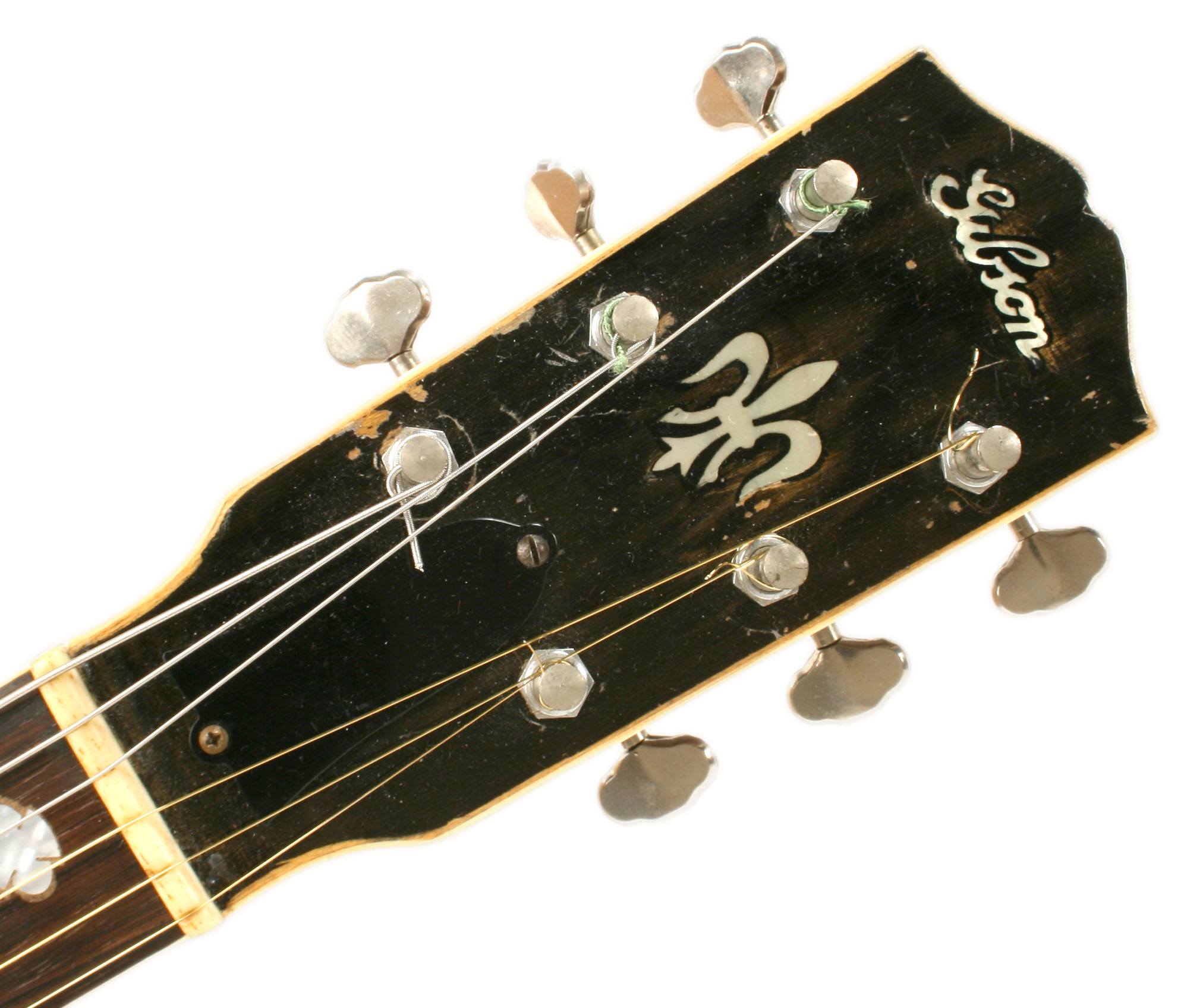 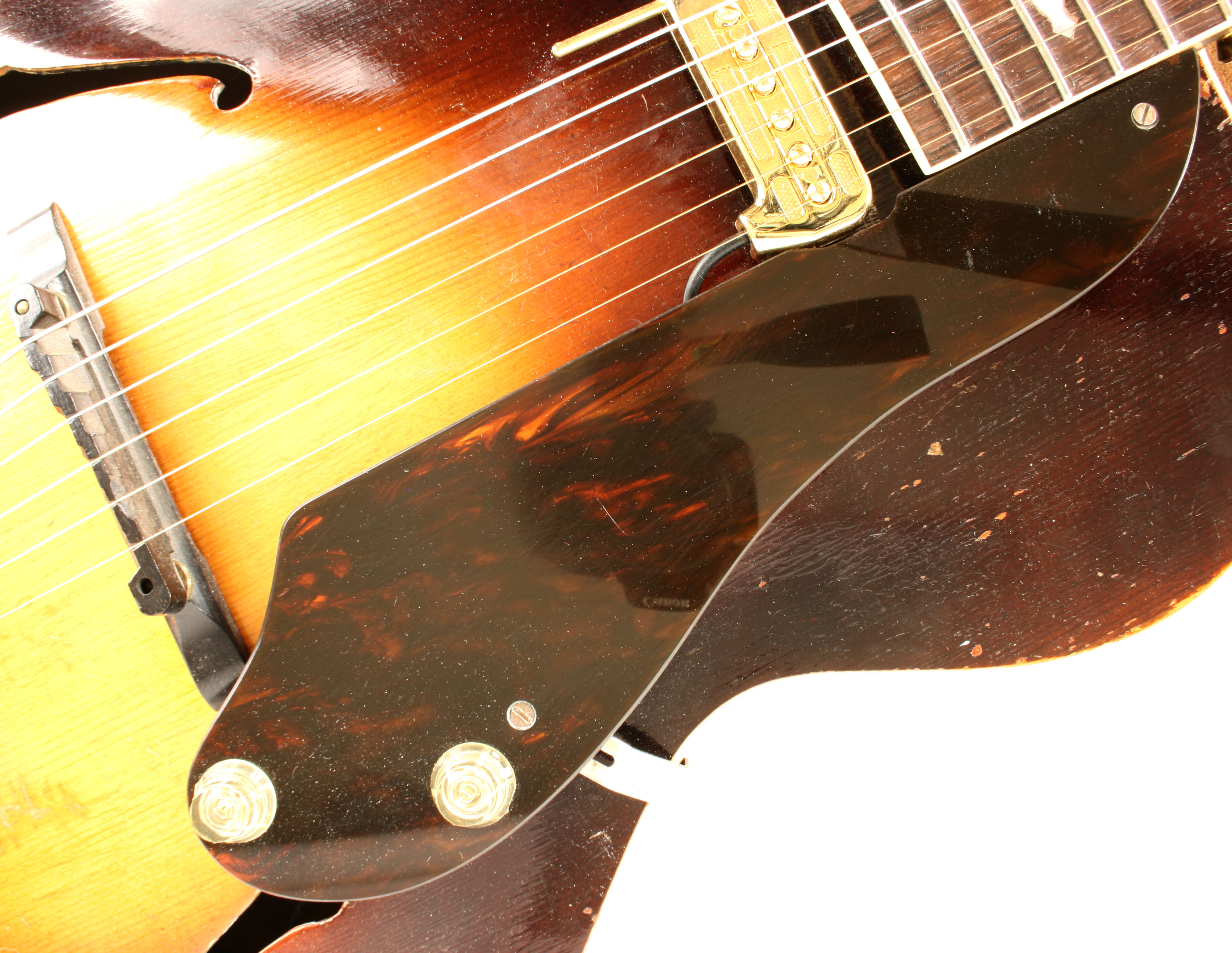 Gibson introduced the "Advanced" model L-5 in 1935, bumping up the body size to 17" and lengthening the scale to 25 1/2". While these changes were welcomed by acoustic big band rhythm players who were seeking greater power and projection, many missed the balance, versatility, and tonal complexity of the smaller 16" L-5s. Fortunately, Gibson kept the 16" option available by redesigning the L-4 along the lines of the old 16" L-5, retaining nearly all the original specs and adding a few new twists including ornate banjo style fingerboard inlays and a flared headstock. Vintage 16" L-5s are one of the most highly coveted of all Gibson archtops, making this nearly identical, yet much more affordable, sister model one of the best deals in the world of vintage archtops.

This instrument was constructed from some of the best materials Gibson had to offer: a gorgeous flamed maple back, maple sides, a mahogany neck, and a carved spruce top. Original hardware includes a set of Grover Sta-Tite tuners and nickel tailpiece trapeze tailpiece. Updates include a new pickguard mounted with a DeArmond Rhythm Chief pickup along with tone and volume controls.

Anyone who has shopped for a good sounding acoustic archtop these days will tell you just how frustrating it can be. As electrics began to take over in the late 30s, Gibson largely gave up on trying to build light weight, highly resonant acoustic archtops in favor of heavier designs that reduced feedback. Now largely a lost art, only a few high priced boutique builders take acoustic archtops seriously, making the search for an acoustic archtop difficult and often very expensive. Fortunately, this well preserved example from the "Golden Era" of acoustic archtops can go toe to toe with the best L-5s out there at a much more affordable price.

With tonewoods nearly a century old, this instrument produces the rich, complex acoustic tone I've only heard in 20s era L-5s. It's featherweight construction and carefully carved top and back are in line with Lloyd Loar's violin based principles for maximum resonance and balance. This instrument projects very well, making it perfect for unplugged performances. It also posses the liquid sounding "natural reverb" that the 20's L-5 are so famous for. The addition of the DeArmond pickup allows for amplification if need be without compromising the instrument's acoustic charms.

This instrument is in excellent condition, with no structural damage or cracks. Other than a smattering of dings and scratches typical of it's age, it's in excellent health. There is a small finish flaw where the neck meets the headstock that appears to have been the result of some glue leaking out of the nut. The label is missing but the specs of this guitar were only manufactured from 1935-1939.
Here's a chance to join a very elite club of vintage 16" Gibson archtop owners without having to take out a second mortgage. Just one, call now!