Stackabones New
April 2007 edited May 2007 in Technique Posts: 597
I haven't heard of this guy until I read this interview. Here's an excerpt--

For years I always felt unhappy about my right hand picking technique as it would feel like it would never quite do what I wanted it to do. I always had trouble crossing strings and playing arpeggios at the same speed that I could play scales. When I was a kid I was taught Gypsy rest-stroke picking (part of my ancestry is from Alsace in France) but I never really developed it. Instead I used the standard free-stroke plectrum technique that 99% of guitarists currently use. About a year ago, after seeing a Bireli Lagrene DVD, I felt that with what I knew I should give this technique another go. The standard Gypsy technique uses mainly rest-strokes with a fair bit of sweeping combined with fast repeated downstrokes for descending arpeggios. After much practice I have adapted this so that I am using mainly alternating rest-stroke picking similar to that used by Joscho Stephan (nowhere near as fast though). If you see a video of Joscho playing (check out “ China boy” on Youtube) it makes most people's right hand look very weak indeed, plus there seems to be very little tension happening. The thing I have noticed is that with this technique, even thought the hand is floating and not resting on the guitar, it feels very relaxed when playing fast, even on arpeggios. Most guitarists, when they move to a faster subdivision, have to tense up to maintain accuracy and will often change their hand position entirely resulting in a lack of mobility. Many modern jazz players have bypassed this rest-stroke technique as they have been told it is no good for bop or it interferes with the rhythmic flow too much. Like many things it was purely anecdotal and not as a result of having tried it for many years discovering it is a dead end. I think Django was right on to it. You only have to see Bireli, Stochelo Rosenberg, Angelo Debarre to realize that the Gypsy right-hand technique is a far more efficient geometry than the standard approach. When it is combined with a more modern harmonic sense and a looser swinging rhythm this technique has proven to be better for straight-ahead jazz even though it is relatively new to me. This discovery has set me on a path of trying to find other things that I may have wrongly made up my mind about without exploring them for myself.


Practicing what he preaches. Not too flashy. Nice lines. 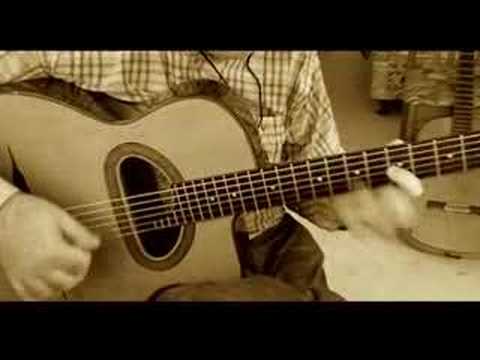