Django Reinhardt, Don Juan and the statue of the Commander

I was having a look at the photo of Django playing Bianchi's famous Carbonel guitar with Coleman Hawkins in presence of Marcel Bianchi, the commander's statue and Stéphane Grappelly on piano, Jerry Mengo on drums and André Dupont on double bass, I mean this one: 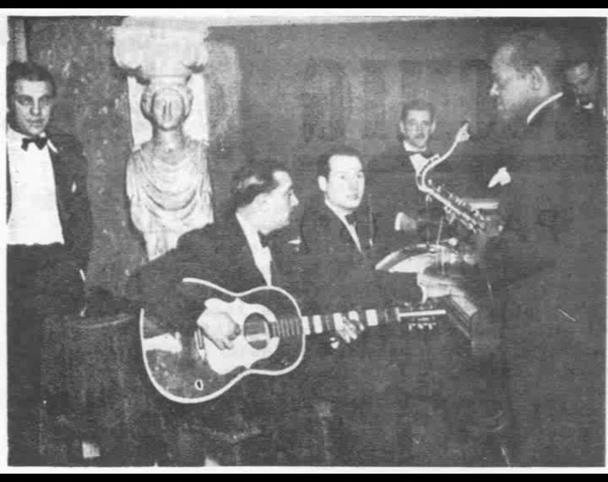 The place appears to be the Club "Don Juan" situated on 11 Rue Fromentin in Paris and the date could even be March 1935 when Coleman Hawkins first came to Paris and maybe not 1937 as generally indicated. Coleman Hawkins had in fact recorded on March the 2nd, 1935 (with Django and Grappelly) 4 tunes (Blue Moon, Avalon, What a Difference a Day Made and Star Dust) "The presence of Jerry Mengo that sang and recorded in March 1935 the famous Lily Belle May June could even reinforce that idea of an early date.

Here's a photo of the Don Juan we very seldom see: 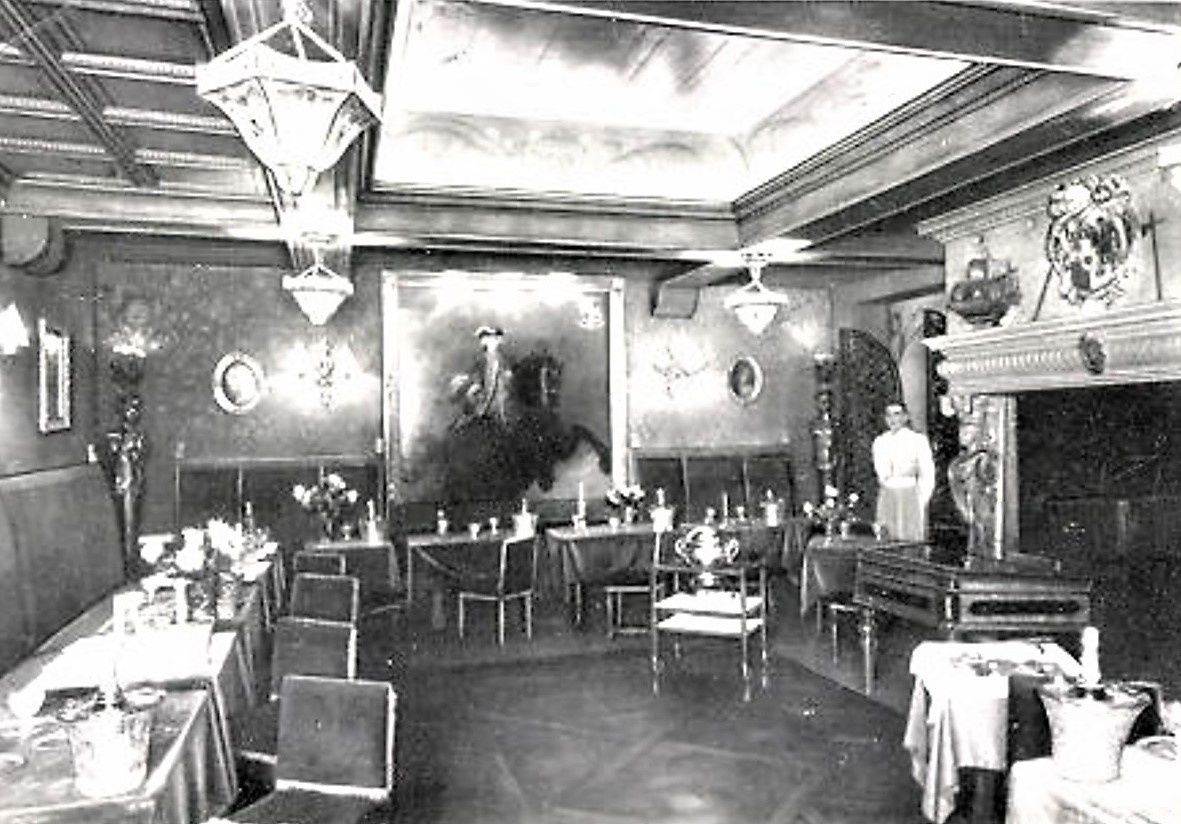 It is difficult to find any newspaper advertising of Django's presence at "Don Juan" in those years but Charles Delaunay mentionned it in his Django's biography stating that the HCQ played there in 1936 and then after the famous night of 1937 New Year's Eve when Django and Joseph had an argument. By the way Jean Rousseau's studies also indicates that the Don Juan prop Harry Pilcer created the club in october 1936 and booked the following musicians for the beginning of 1937: 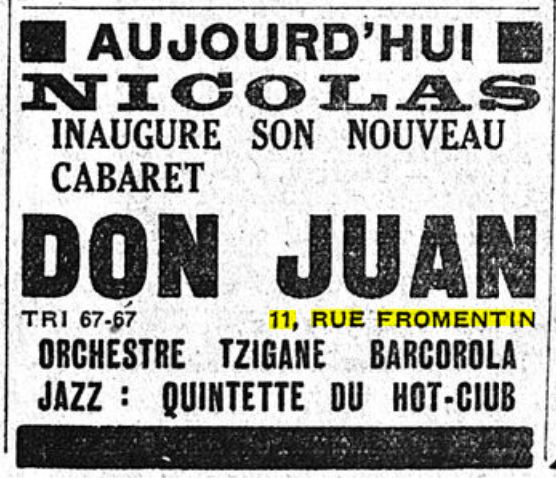 So the first photo is taken on march 1937 and not 1935. 1937 is in fact the date of the second venue of Coleman Hawkins and date of the arrival in Paris of Marcel Bianchi that recorded with the HCQ in 1937 taking a banned Joseph Reinhardt's place for monthes. Charles Delaunay at this time also created his own record company "Swing" and the first record SWING Nr 1 that ever was recorded had to be Coleman Hawkins Orchestra with Combelle, Carter, Ekyan and Django: A very important document showing that french jazz wasn't late in those years. 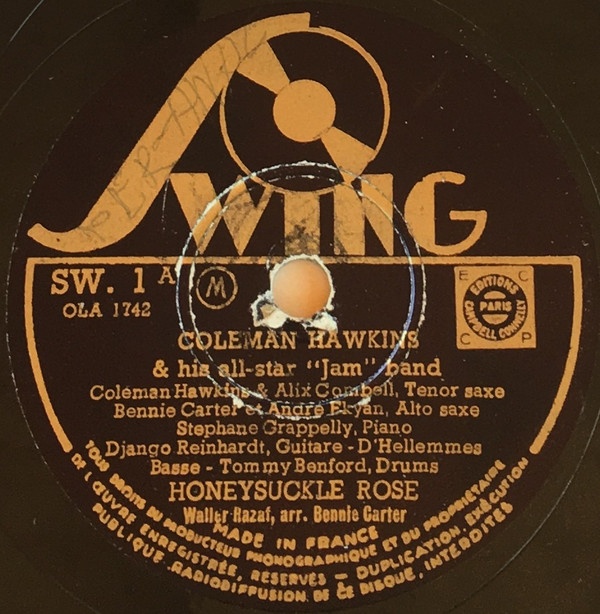 The second photo is a classical Quintet one with Louis Vola on Bass behind a big cymbalum with a front line formed by Stéphane Grappelly on violin, Eugène Vees, Django, and Joseph Reinhardt. In both photos the statues adorning the big fireplace are clearly visible. Probably the woodfloor and the boxed ceiling gave a sufficient acoustic volume to the orchestra to play without any amplification. Date could be late 1936 as Joseph Reinhardt is still present. 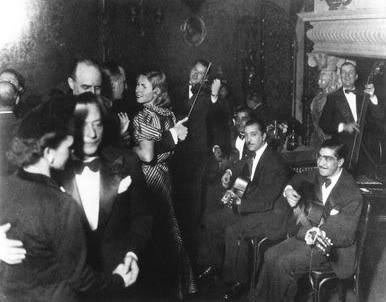 The Don Juan club soon vanished in june 1937 (Jean Rousseau Archives) abandoning the fame to the "Monte Cristo" club on the other side of the street at number 8 but maybe he just changed orientation as still advertised till 1952...

Sometimes I dream I could time travel to those places and hear Django and Hawkins live... who knows?

In any case the place still exist by miracle and can be found at the Royal Fromentin Hotel at Rue Fromentin 11 in Paris, let's have a look 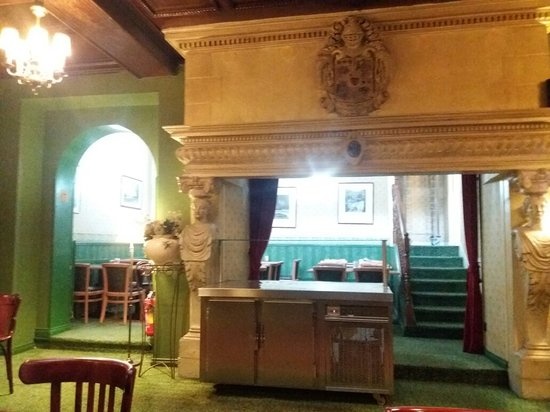 The cymbalum has been replaced by some fridge but the fireplace is intact and the Commander's statues are still on!

Here the photo is taken exactly where Django was seated... have a good time travel!