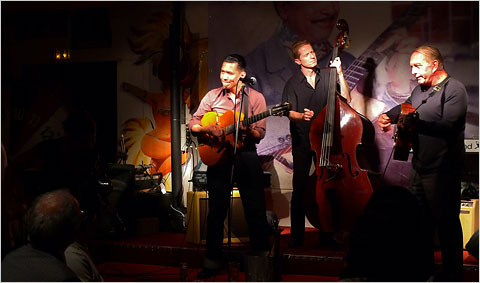 In the deep red light bathing the back end of Le
Baron, a former brothel that is possibly the most exclusive
nightclub in Paris,
Josh Weller
— a young British singer-songwriter who looks like a cross between
Poindexter from “Revenge of the Nerds” and Kid from Kid ’n’ Play — was
finishing off his set. With the audience singing along, he brought his
tune “What Will My Girlfriend Say?” to a dramatic crescendo, his voice
echoing both Conor Oberst and Jack White, before ending it suddenly and
silently. After the applause, he issued a polite request: “Please buy
my album so that I can eat.”

Matt Gross
The New York Times Outside Le Baron after
a show.

The Frugal Traveler was sorely tempted. Despite the stringent door
policy — you don’t get in unless the doorman knows you, or in my case,
my friend — there’s no cover charge at Le
Baron (6, avenue Marceau; 33-1-4720-0401; www.clublebaron.com).
But alas, my friend and I had already bought two tiny bottles of
Heineken that cost a hilarious 10 euros each ($14.30 at $1.43 to the
euro), and I was feeling less than flush.

Besides, I had more music
to listen to that week, and who knows how many more overpriced drinks
to buy. During my nine frugal days in Paris, I was trying to see as
many bands as possible, in as many genres as possible, from classical
and religious music to the chansons of the prewar period to the French
hip-hop I’d discovered in college and the indie rock and Afropop I’d
become enamored of in recent years. All this on a budget of 100 euros —
a sum I assumed would vanish instantaneously.

It was a faulty assumption. While you’ll pay to see the bigger acts
in Paris, so many of the smaller (and cooler) venues are free that I
never paid a single cover charge. Nor was finding a show difficult. A
pamphlet-size weekly magazine called LYLO (Les Yeux Les Oreilles, or
The Eyes The Ears, distributed at clubs and record stores) listed
nearly every venue and performance in Paris, broken down by genre and
neighborhood.

There were really only two challenges: First, many of the best shows
took place between 7 and 10 p.m.— in other words, at dinnertime,
meaning I often had to choose between filling my belly and sating my
appetite for music. Second, there were so many shows going on that
figuring out which to see was near impossible, especially since I’d
heard of so few of the bands. (Getting in, at least, was easy: only Le
Baron had velvet ropes.)

To simplify things, I tried to stick as much as possible to
specifically French genres. No salsa, no polka, no foreign bands.

Matt Gross for
The New York Times A show at Villette
Sonique.

I failed almost immediately, thanks to Villette Sonique (www.villettesonique.com),
an open-air festival of rock, pop and electronic music held in the Parc
de la Villette, which straddles two canals in the 19th Arrondissement,
almost outside the city proper. The shows — which include some bigger
names like Diplo and Black Dice — are free, and the park itself is a
wonderful place to while away an afternoon with the sunlight glittering
off the water and off a huge chrome sphere that houses an Omnimax
theater. Perched atop a small hillock, with a bag of cherries in my
lap, yet another sandwich au jambon and a large bottle of Kronenbourg
to share with my friends, I didn’t care much that the Saturday lineup
came from North America.

The first two bands — Tussle, a Los
Angeles four-piece, and Lightning Bolt, a noisecore band from Providence,
R.I. — didn’t really fit the environment: their sounds got lost in the
fields and broken up by trees. But the last band of the afternoon, the Montreal-based
Duchess Says,
sounded great: punky, with just enough sweet melody to balance the
adrenaline, plus a high-energy, madly dancing frontwoman — who sang, at
last, in French!

A few days later, I made another attempt to catch some French indie
rock, at La Bellevilloise (19-21, rue Boyer; 33-1-4636-0707; www.labellevilloise.com), a
bar-restaurant-club in a region of the 20th saturated with music
venues. (The best of them, La
Flèche d’Or, was closed for renovations.) Again, I was stymied.
Although the Paris-based folk-pop-bluegrass band La Féline
had some catchy riffs, they had to compete not only with the poor
acoustics indoors but with the lure of the outdoor terrace, where my
gang of friends and I quickly gravitated for its views over the city,
and the club’s restaurant, where I ate a fine, and affordable, salade
de gésiers (13.75 euros).

Finding great French indie rock was not working out as smoothly as
I’d hoped, so I started sifting through LYLO, the entertainment site GoGoParis.com
and various blogs, looking for Afropop shows. I found two bands whose
albums I own — the Cuban-inflected Orchestra Baobab, from Senegal,
and the Super Rail Band de Bamako — but both were playing far south of
the city. I had even less luck looking for raï, the dance music popular
with France’s North African immigrants. There was nothing at all.

Was I missing something? I stopped in at Le Silence de la Rue (39,
rue Faidherbe; 33-1-4024-1616), a record shop near the Hôtel des
Arts-Bastille, to ask advice. The owner, somewhat apologetically,
informed me that although lots of Afropop and raï musicians live in
Paris, there were no dedicated clubs in the city limits. He did,
however, steer me to some interesting contemporary French music: Sporto Kantès,
a duo who build densely layered, addictive, Moby-ish
tunes from dozens of samples and styles (check out this video
for their single “Whistle”); and “Le Nouveau Rock N Roll Français,” a
22-band compilation from 2004. Together the CDs cost just over 14 euros.

Maybe this sort of serendipitous encounter was better than scanning
pamphlets and Web sites? After all, I’d been treated to a fantastic,
energetic performance of French chansons — the wordy, rollicking tunes
sung by giants like Piaf and Aznavour — by a subway busker who gamely
strummed his guitar through four songs while our train was stuck
between stations. When we finally arrived, I only had time to tip him 2
euros and get his first name — Vincent — before the crowd parted us.
And on Sunday, when I happened by the Sainte-Croix Armenian Cathedral
(13, rue du Perche), in the Marais, I noticed fliers out front
advertising a free mandolin concert inside; I couldn’t go then but
returned a week later to hear two French-Japanese ensembles jounce
through waltzes, tangos and polkas.

Serendipity is wonderful, but predictability has its place, too. One
Saturday, up at Porte de Clignancourt, across the street from the
St.-Ouen flea market, I went to a bar called La Chope des Puces (122,
rue des Rosiers; 33-1-4011-0249), where the live bands specialize in
jazz manouche, the “gypsy jazz” style defined in the 1930s by the
legendary French guitarist Django
Reinhardt. That night, the acclaimed Aurore Quartet
was playing (no cover charge), and though their sound harked back
decades, they were hardly museum pieces. The two guitarists romped
along with magnificent verve and control, but it was the singer and
violinist Aurore Voilqué who brought each song together, often stepping
nonchalantly onto the stage to bust out some seriously hot fiddling. I
know you’re not supposed to say this about jazz musicians, but they
rocked.

On my final night, I wanted to hear a distinctly French band live,
and I followed a friend’s advice to check out ARLT, whom she called “a
modern update on French chanson — lead singer is quirky and
charismatic.” Unfortunately, at International (5-7, rue Moret;
33-1-4929-7645; www.myspace.com/linternationalparis),
a club a few minutes’ walk from my hotel, Les
Chansonniers
was behind schedule, and Spires That in the Sunset Rise was playing
instead. “Playing” really isn’t the word for what the band was doing;
funeral dirges have more pep than these women.

So, I fled — around the corner, to Alimentation Générale (64, rue
Jean-Pierre-Timbaud; 33-1-4355-4250; www.alimentation-generale.net),
which I’d looked up in my LYLO. The club was crowded, sweaty, hot and
awesome, thanks to the Planter’s Punch cocktails (4 euros) and the
Latin-Yiddish-Italian-swing-what-have-you stylings of Le Bal des Martine,
whose not-entirely-French maracas and accordions had me stripping off
my jacket and sweater to groove amid the crush. Like all classic balls,
however, this one ended at midnight, and as I walked home through the
cool night, I remembered Duke Ellington’s famous line about music — “If
it sounds good, it is good” — and added a coda: When it’s free, it’s
even better.